By Tammy Mastroberte, Contributing Editor - 02/14/2012
Get great content like this right in your inbox.
Subscribe
As consumer technology continues to advance, hotel guests are becoming harder to please. Whether traveling for business or pleasure, guests are often armed with at least two devices —­­ be it a smartphone, tablet or laptop — and not only expect to stay connected wherever they are, but also demand the luxuries found in their own homes.

“The biggest thing that business and leisure guests want is to be able to stay on their routine when they travel,” says Christina Williamson, senior director of brand strategy for Comfort Inn and Suites at Choice Hotels International (www.choicehotels.com) in Silver Spring, Md., explaining the company recently researched what type of technology should be invested in based on customer needs. “They have expectations, like a flat-panel television, that wasn’t there two or three years ago.”

Guestroom technology is the largest portion of the 2012 tech budget for hotel operators, according to Hospitality Technology’s “2012 Lodging Technology Study.” Enhancing guest services, including flat-panel and high definition televisions, which many report as part of this year’s plan, ranks No. 2 in a list of important business goals, and 83.7 percent of respondents report guestroom technology projects as important to their company.

Hospitality Technology reviewed industry research and spoke to hotel executives to identify five technology trends to watch for in the guestroom in 2012.

Interactive Television
When it comes to television, it’s out with the tube and in with the flat screen. More than 60 percent of hotel operators reported offering a flat-screen, according to the HT survey. But, offering a flat screen is just the beginning. Consumers are looking to use a hotel room television the same way they use it in their home, which means watching a high-definition picture with the ability to rewind, pause and record a program.

“We are seeing a significant trend of guest dissatisfaction when they don’t have a flat panel television, so over the last 18 months we have been in the process of replacing 50 percent of our televisions and will continue to do so as budget permits,” says John Lowes, executive director of guest technology for MGM Resorts International (www.mgmresorts.com) in Las Vegas, explaining that the company is also looking into the option of IPTV (Internet Protocol Television).

“IPTV looks like something our guests will be expecting,” says Jeff Gionet, director of technology at Starwood Hotels and Resorts in Waikiki (www.starwoodhotels.com) in Honolulu, Hawaii. “Guests will be expecting it and are used to the faster response and using a DVR to record programming. The IPTV will give them more high-definition selections too.”

Taking the television one step further, at Cambria Suites, the upscale lifestyle brand for Choice Hotels, the company incorporated a Teleadapt’s (www.teleadapt.com) MediaHub HD plug and play technology to allow guests to stream music, video or games through their television set, notes Rocco Loverro, project manager at the company.

Bandwidth Boost
Multiple devices mean the need for more bandwidth, and many hotels are looking to provide it in the next two years. Looking at HT’s study, 28 percent of hotel operators plan to upgrade and increase bandwidth to guest rooms in the next 6 months, and 21 percent will do so in the next 12 to 24 months.

“We do custom research surveys, and a couple of years ago we asked both business and leisure guests about what in-room technology satisfies them or what disappoints them if we don’t have it, and high speed Internet access was top,” on the list, Williamson notes.

Increasing bandwidth costs money, and one option is to offer Internet access for free up to a certain amount, and then offer tiered pricing, says Lowes. “Three years ago maybe 50 percent of the population had a notebook computer,” he explains. “Now, 100 percent have some type of portable device, so we have been making significant investments and talking with partners for both cellular and Wi-Fi.”

There are different options to boost bandwidth depending on the infrastructure and when the next major upgrade is planned. For example, the Royal Hawaiian hotel underwent a complete renovation in 2009, which included category 5 cabling and fiber to offer Ethernet in guestrooms, Gionet says. However, at the Sheraton Waikiki, another Starwood property, a category 3 cable is in place and upgrades are not scheduled for at least 10 years. As a result, the company chose a VDSL service fromAlcatel-Lucent (www.alcatel-lucent.com) that could carry a heavy bandwidth.

“It gave us one-hundred megabytes wired and can go up to 300,” Gionet explains. “For properties with renovations happening sooner, we are using a Motorola T3 (www.motorola.com), which is an excellent product that will get us by for the five or six years until an upgrade.”

Mobile Madness
With the increase in mobile devices available on the market, consumers are doing more on-the-go, and hotel operators are capitalizing on the trend. Not only are mobile apps being utilized for making hotel reservations, but also for meeting guest needs while staying at the property.
At The Westin Riverfront Resort and Spa at Beaver Creek Mountain in Avon, Colo., the property went live with MyBeaverCreek Westin mobile app in October 2011, allowing guests to use a smartphone to book a spa appointment, ask housekeeping for additional towels or order room service from the ski slope.

“As guests become more tech savvy, it becomes part of their life,” notes Jeffrey Burrell, director of operations at The Westin Riverfront Resort and Spa. “Hotels need to allow guests to create their own service experience on their schedule, not the hotel schedule.”

The app runs on a platform from Runtriz (www.runtriz.com), and requests are sent to the property’s service express area computer where someone monitors and executes them, according to Kristen Pryor, director of sales at the property. “Right now it’s a novelty, but in a year it will be more of an expected service,” she notes.
This offering followed the property’s first mobile app, which allowed guests to book reservations. “We noticed that 30 percent of our traffic to the website was coming from Safari this year, where last year it was only five percent, so we know more people are using their mobile phones and tablets,” Pryor explains.

The same is true at Choice Hotels’ Comfort Inn and Suites properties, which launched a mobile app a year and a half ago and already has seen “hundreds of thousands of downloads across 80 countries,” Williamson says. The company is now looking into offering an interactive touchscreen in the lobby area as a virtual concierge for new builds.

More Than a Door Lock
Magstripe technology has been the choice for door locks at the majority of hotels in the past, but the next generation is RFID. “I think RFID is the apparent successor to magstripe,” notes Gionet. “It’s a simple technology and proven to work. It’s more expensive, but very reliable, and if you centralize them, you can build in intelligence.”

At MGM’s Aria property (CityCenter Las Vegas), the RFID door locks from KABA (www.kaba-ilco.com) are integrated with network technology from Control4 (www.control4.com) and Zigbee, so when a guest enters the room there is a welcome scene. The drapery opens, the television turns on, music plays and the lights turn on, says Lowes.

“At checkout we turn the lights off, make sure the television is off and close the drapery,” Lowes notes, explaining RFID technology is quickly replacing magstripe. “Most recently, lock manufacturers are reporting that about 50 percent of the locks going out the door are RFID.”

Energy Management
The ROI for installing an energy management system is often worth the initial cost. This is another area many hotel operators are looking to invest for 2012.

“The ROI on this type of technology is huge, and we have energy management controls that allow us to control the guest rooms remotely,” explains Westin’s Burrell. “If you have a hotel room sitting empty, the cost of having it at 68 degrees compared to what a guest would keep it at is a
big difference.”

Europe is even more sophisticated, says Burrell, noting that many hotels only activate heat, water and other energy controls when a guest unlocks the door.

Mobile Payments
Runtriz Pay Brings Caesars’ Guests Fast, Secure and Simple Payment So They Can Stay in the Game 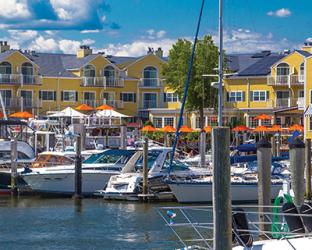