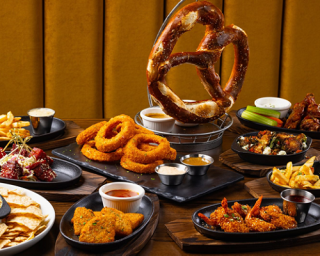 Once a specific site is identified, it will mark the second non-traditional, satellite location for the franchise brand after recently celebrating a successful grand opening at FedEx Field, home to the NFL’s Washington Football Team. Taffer is working with experienced airport concessions operator Raj Gandhi to establish the first of several Taffer’s Tavern airport locations.

“With the return to travel underway, I strongly believe that Taffer’s Tavern will thrive at any airport. An airport is not just a hub for airplanes and airstrips anymore, nowadays it provides an enjoyable and memorable travel experience that starts long before customers arrive at the terminal. Patrons are looking for unique style dining options with quality food, which is exactly what Taffer’s Tavern Old-World tavern ambiance and menu provides,” said Gandhi. “From a business perspective, with an average split of 50/50 food and beverage sales, the latest advancements in food preparation technology, and Jon Taffer’s decades of experience in the hospitality industry, Taffer’s Tavern is an ideal restaurant concept to introduce as an airport location.”

HT has followed closely Jon Taffer’s Kitchen of the Future Concept.  In his October 20, 2020, interview with HT, he shared details about his "kitchen of the future" and his Taffer’s Safe Dining System, which includes robust use of technology: Krowne's VR Workforce Training, Shift4Payments and Skytab for its POS and payment processing, and PathSpot's hand hygiene tech. Taffer’s Tavern has seated tens of thousands of customers through Waitbusters’ wait line and reservations management system and offers takeout and delivery and added a thru-wall, contactless locker system.

“Busy airports have tens of thousands of hungry travelers passing through the terminals each day. An airport location will allow people from all over the world to see and experience the Taffer’s Tavern brand as we continue to open full-service and non-traditional restaurant locations in some of the busiest areas throughout the country,” said Jon Taffer. “I designed Taffer’s Tavern to provide consistent, high-quality casual dining with state-of-the-art technology. I’m so excited about working with a proven full-service airport operator like Raj to bring Taffer’s Tavern to an airport setting, which will greatly benefit from these built-in efficiencies.”

In addition to the recent FedEx Field location opening and inaugural restaurant opening in the Atlanta area last fall, Taffer’s Tavern is preparing to open a full-service restaurant within the high-energy Penn Quarter neighborhood, adjacent to the Capital One Arena in downtown D.C. To facilitate growth for the emerging brand, Taffer has partnered with Fransmart, the industry-leading franchise development company behind the explosive growth of brands like Five Guys Burgers and Fries, and QDOBA Mexican Grill.

“Studies have shown people spend up to $140 in the airport on average before they even board a plane. Given Raj’s experience as an airport restaurant operator, it was easy for him to recognize that opening a Taffer’s Tavern as an airport location allows the business to take advantage of high volume of people in a defined space,” said Fransmart CEO Dan Rowe. “A Taffer’s Tavern will perform extremely well due to being a hoodless/ventless restaurant with a highly successful drink program that is able to consistently serve customers delicious, high-quality tavern fare at lightning-fast speed.”

Taffer is leveraging his decades of experience in the hospitality industry, along with the latest advancements in food prep/service technology and the industry’s highest safety standards, to start a casual dining revolution. The groundbreaking concept is ideal for multi-unit franchisees and experienced entrepreneurs looking to be part of a rapidly growing brand with the flexibility to operate in both traditional and non-traditional locations. Operated with a kitchen of the future, the industry-leading technology used in Taffer’s Tavern allows minimal need for food preparation and handling, drastically reducing back-of-house labor. In addition, the innovative and simplified cooking techniques allow for less experienced kitchen staff and helps reduce cook time by 50 – 90% compared to traditional kitchens.

“The operational model and brand power of Taffer’s Tavern is unique all-around. I’m thrilled to have the chance to collaborate with Fransmart in a new way after working with the organization to establish my very first franchise endeavor,” continued Gandhi. “I have known Dan Rowe for more than 15 years now. I appreciate his mentorship and value his extensive experience in the franchising industry, so I know when Fransmart presents an opportunity to me it’s going to be a winning concept.”