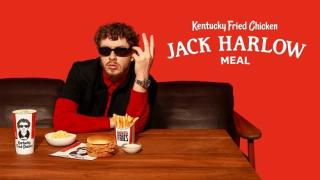 This promo includes Jack Harlow's menu picks and a line of co-branded merchandise. Fans can download the KFC app and opt-in to push notifications to know when the merch line is available and for other exclusive Jack Harlow content.

Grammy award nominee Jack Harlow has partnered with KFC to promote  the Jack Harlow Meal – a combo meal curated by the Kentucky native, available at KFC restaurants nationwide and via KFC.com and the KFC mobile app beginning  June 6.

Restaurants have been teaming up with musicians, athletes and other celebrities to promote their favorite meals to reach their (younger) fans and drive sales. McDonald's has also found success with its McDonalds’ Famous Orders program that have included Travis Scott and South Korean boy band BTS. In the Q1'21 earnings call with analysts,  Joe Erlinger - President of McDonald's USA, said, “Nothing had a greater impact on our digital business, than the introduction of this program last year... We've retained many of the digital customers acquired during those Famous Order promotions."

"From releasing 'Come Home the Kids Miss You' and now launching my own meal at KFC, I'm having a super blessed summer," said Harlow. "When KFC asked me to create my own meal, I knew it couldn't be just any meal. My meal brings together my childhood favorites from growing up in Louisville, the KFC Mac & Cheese, with my new go-to Spicy Chicken Sandwich (with plenty of ranch), Secret Recipe Fries, and lemonade."

To celebrate the launch of the Jack Harlow Meal, KFC will transform an Atlanta KFC into Jack's Meal HQ (2637 Cobb Pkwy SE, Smyrna, Ga.) on June 4 to give fans a first-class taste of Harlow's custom meal. Atlantans will be the first to try the Jack Harlow Meal while they listen to Jack's new album from an Instagram-worthy KFC x Jack Harlow bucket speaker playing Harlow's latest hits as well as experience surprises throughout the day.

In honor of the new Jack Harlow Meal at KFC, Harlow and KFC have also teamed up to drop a line of co-branded merch that will be available for a limited time only (while supplies last). Fans can download the KFC app and opt into push notifications to be the first to know when the merch line is available and for other exclusive Jack Harlow content.

Harlow's passion for his home state of Kentucky makes this an ideal partnership, said Nick Chavez, CMO of KFC U.S.

Harlow is taking to the airwaves to introduce his Jack Harlow Meal in new commercials that feature his chart topping hit song "Nail Tech."

Guests can skip the drive-thru line and get their hands on the Jack Harlow Meal faster by ordering through KFC's Quick Pick-Up option on the KFC app or KFC.com at select locations. After placing a digital order for Quick Pick-Up, guests can head to the restaurant, park in dedicated VIP parking spots, and run inside to grab their hot and fresh order waiting for them on KFC's new Quick Pick-Up shelf.