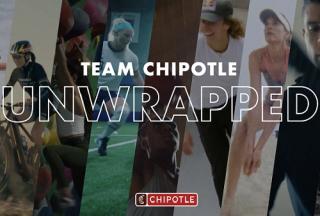 At Chipotle, sports fans have the chance to eat like their favorite athletes through specially curated menu items

In addition to the new digital menu items, Chipotle worked with partner athletes to launch behind-the-scenes training content as part of its "Unwrapped" series. The "Unwrapped" videos provide an inside look at Chipotle's athlete super fans and what it takes to compete at the highest level.

All Chipotle "Unwrapped" videos can be viewed here: www.chipotle.com/teamchipotle.

"Chipotle is proud to be an integral part of athletes' training regimens across all levels," said Chris Brandt, Chief Marketing Officer. "We're excited to share Team Chipotle's stories and rally our fans around these elite competitors."

Ertz has been a long-time super fan of Chipotle and had her go-to order featured as an official digital menu item once previously in July 2019. Ertz also famously had her first date with husband Zach Ertz at a Chipotle restaurant.

Dining with the Stars

These types of Celebrity Meals have been catching on. McDonald's shared the success of McDonalds’ Famous Orders program. The Travis Scott meal – and revealing what the musician’s go-to McDonald’s order and enabling customers to order the same with ease - has been a whirlwind success.

“Nothing had a greater impact on our digital business, than the introduction of this program last year,” Joe Erlinger - President of McDonald's USA, in the Q1'21 earnings call with analysts. “We've retained many of the digital customers acquired during those Famous Order promotions."