When The Wendy's Co. talks about its "digital evolution," it has a very specific vision for the future of the company. As revealed during its Q4 2017 earnings call on February 22, its continued digital evolution includes a focus on its third-party delivery partnerships, its mobile app and the installation and use of self-ordering kiosks at restaurants.

According to Todd Penegor, president and CEO, Wendy's started offering delivery with DoorDash at the beginning of the fourth quarter and has on-boarded more than 20% of its North American restaurants. As DoorDash expands its coverage of North America, Wendy's will expand with it. However, the QSR is also looking to add additional delivery partners in "an effort to expand even faster."

"The economics have proven to be worthwhile as early reads indicate that delivery orders are highly incremental, especially in the evening day-part and result in higher average checks, both of which are positives for our restaurant economic model," Penegor noted.

In addition to a focus on delivery partnerships, Wendy's will also focus more on its mobile app and specifically mobile orders. According to Penegor, at the end of 2017, 80% of Wendy's North American system was capable of accepting mobile orders. During the fourth quarter, the restaurant chain also introduced mobile offers, which was not only good for restaurant performance, but drove more downloads of the app. For example, the burger chain is currently offering those that download the app a buy 1 get 1 free promotion for a Dave's single burger or a spicy chicken sandwich.

It also noted that it is preparing all locations to "be ready" for when headquarters decides that mobile ordering will be an option for all locations, not just at a select few. One way it is doing that is by ensuring that all locations are prepared to separate order pay from pickup. Penegor noted that the company was very pleased with the progress it had made with that initiative so far.

"We are also excited that our rewards pilot is now underway," Penegor stated, "and we are eager to read the results in the coming weeks. With all of these pieces coming together, we are looking forward to bringing mobile ordering and rewards to life in 2018."

When asked why Wendy's is confident that online ordering and mobile app development will be the technology that continues the company's success, Penegor noted that technology allows the company to better connect to the consumer.

For example, the company discussed how it introduced digital offers in the fourth quarter during December. It found that the digital offers drove a lot of app downloads, and more engagement.

"We're testing loyalty in a couple of markets right now," Penegor noted, "which is another great connection point to give [diners] a reason to go in and use our digital tools. And when we've got those pieces ready for a national rollout during the course of this year, and it will be during the course of this year, we can bring all that to life and really turn it all on."

The third piece of Wendy's digital evolution puzzle is self-order kiosks. To further enhance convenience and the overall customer experience, the company said it will continue to install these kiosks at restaurant locations. At the end of 2017, it had installed kiosks in approximately 150 restaurants. According to the company, noteworthy benefits of kiosks include: the opportunity for incremental throughput during busier day-parts; higher-average checks; and an ability to leverage labor costs.

"It's important to remember that our digital evolution would not be possible without our continued investment in our common point-of-sale system," Penegor concluded. "We continue to work hard on making sure we've got a strong platform with our common POS system that then can layer on all of the technology pieces that we talked about earlier in mobile order, pay, kiosk, loyalty, digital offers. We need to maintain a strong foundation in order to achieve our technology vision going forward." 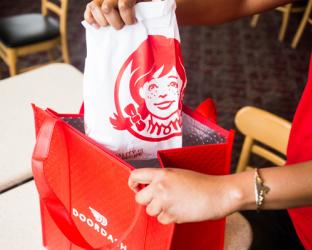 After a successful pilot earlier in the ear, Wendy's decided to rollout delivery across the nation.