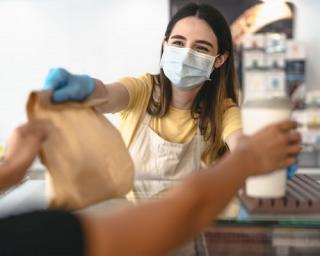 Employees not wearing masks is by far the number one reason why consumers will not return to an establishment.

Drive-thru visits continue to rise and have increased even more since April, according to the Second State of What Feeds Us Reportby Bluedot in partnership with market research agency SeeLevel HX.

The research, based on a survey of 1,501 American consumers, was completed last month. The findings offer critical insights to help brands navigate through the rising pandemic.

Highlights of the report include a major spike in mobile app usage, up to 64% from 51% since the first State of What Feeds Us Report released in April which also uncovered a sharp uptick in mobile app usage. Strikingly, fast food customers have substantially increased their visits to the drive-thru with a 43% jump since the first report three months into the pandemic. Nearly three out of four consumers are now visiting the drive-thru as often or more often than before. Consumers have also increased their use of curbside pickup with 62% choosing the contactless option as much or more often over the last month.

The report revealed the vast majority (81%) of consumers feel that waiting more than 10 minutes at the drive-thru is too long. Further, 4 out of 10 customers say wait time longer than 4 minutes for curbside pickup at a fast food restaurant is too long.

There's a direct correlation between wait times and revenue. SeeLevel's annual QSR Drive-Thru Study indicates service times could be costing QSRs roughly $36,397.80 per unit per year on average. This new data further emphasizes how critical it is for QSRs to explore new strategies for improving efficiencies to both stay competitive and increase revenue, says SeeLevel.

Safety and sanitation also stood out as key factors with COVID cases continuing to rise throughout the country. Not only do consumers want to see staff wearing masks and gloves, they also want to see sanitation and safety information posted at the drive-thru (29%) as well as less or zero contact with staff (25%).

To learn more, the second installment of State of What Feeds Us  can be found here.