By Dorothy Creamer, Managing Editor - 12/12/2013
Get great content like this right in your inbox.
Subscribe
The foodservice landscape is diverse and ever-changing. The lines that delineate concept and service types are becoming more blurred, as are the operational boundaries that define the service experience. As this merging occurs, restaurant operators and technology providers are scrambling to keep up with how best to engage consumers, and are learning the increasing importance of moving quickly.

“Business used to be about big companies gobbling up small ones, but transparency and technology have changed that dynamic, probably forever,” remarked Abigail Lorden, editor in chief of HT, in her opening remarks at the 2013 Restaurant Executive Summit. “These days it’s all about the fast eating the slow and that concept is central to our theme for this year’s Summit.” Gathering under a theme of “Foodservice Innovation: The Fast Eat the Slow,” senior-level restaurant executives from all areas of business, including technology, marketing, finance and operations, gathered with peers and solution providers for the ninth annual Summit, held October 2-4, 2013 at Four Seasons Dallas.

The Summit got a high-octane start with keynote speaker Scott Stratten, president of Un-Marketing. Stratten’s session, titled “The Fast Tweet, er, Eat the Slow” took an irreverent look at how organizations become bogged down by the effort of branding rather than having a real-time “awareness of who you are in the marketplace.” Using real-life examples from his own experiences as well as submitted gaffes featured in his book, “QR Codes Kill Kittens,” Stratten put a laser focus on how companies should tackle social networking. “If you’re gonna play the social game, you gotta do it all the time,” he said. “Do it right or get out.” Stratten also stressed that brands don’t have to be on Twitter to trend on Twitter, explaining that going viral is reaching beyond your reach. He also encouraged attendees to remember that when negative feedback occurs, the angry consumer just wants to feel like he or she was heard. “A swift and appropriate response can make you look better than before the screw-up,” he noted.

The Day Two Keynote, “Move Fast, Be Willing to Fail & Try Again,” complemented the theme of the Summit. Moderated by Honorary Chairperson Scott Wise, CEO of Scotty’s Brewhouse, the panel featured: Randy DeWitt of Twin Peaks (fresh off his appearance on CBS’s Undercover Boss), Jeff Linville of Taco John’s, and Lon Southerland of Marriott International. The execs delved into many hot button issues including loyalty, business intelligence and social networking, plus shared their own experiences with keeping their brands current. “You can never be quick enough,” Linville admits. Southerland also advised attendees to never be adverse to intelligent risks. “When you make the right decision for your customers, you seldom make a mistake,” he said.

A range of other sessions covered such topics as: “The New Take on Fusion: Multi-Channel Restaurants,” “Cracking the Code on Must-Have Technology,” “Wall Street Consumer Spending and Growth,” and more.

The Summit provides a rare opportunity for executives to hear directly from industry peers what they are doing — and more importantly ­— what works. This valuable insight is taken back to the operators’ respective organizations, often before they even leave the conference. Greg Hazard, COO of Paradigm Investment Group, which operates 97 Hardees mostly in the Southeast, called in some operational changes after the keynote session. “After Scott’s speech, I realized the incredible value of immediacy in responding to guests,” he explained. “We were allowing DMs 24 hours to show us what they did to resolve guest issues, but we are shortening that to six to change our response window to be much tighter and prioritize that.” Hazard also gleaned takeaways from the “Multi-Channel Restaurants” session presented by Geoff Alexander, EVP of Lettuce Entertain You and managing partner of Wow Bao. “We are taking on a new concept, Blaze Pizza, and when we saw the Wow Bao presentation and the value in kiosk and online ordering for his business, green lights went on for us,” Hazard remarked.

Anthony Smith, president of Paul Martin’s American Bistro, values the overall lineup of sessions. “Things are always changing and it’s important to come to events like this to stay relevant to what the trends are, how people are eating, how they are responding, what they are responding to and what they are not responding to,” he said. “It’s the little nuggets you take away from each session that is really important.”

The 2013 Breakthrough Award winners were also announced at the conference. These awards honor restaurant companies for their outstanding vision and achievement in delivering technological excellence to the operation and the guest experience. The 2013 Breakthrough Awards were presented to Tony Roma’s for Enterprise Innovation and Fleming’s Prime Steakhouse & Wine Bar for Customer Engagement Innovation.

The 2014 Restaurant Executive Summit is scheduled for November 3-5, 2014 in Fort Lauderdale, Florida. Stay tuned to www.htmagazine.com for more details. 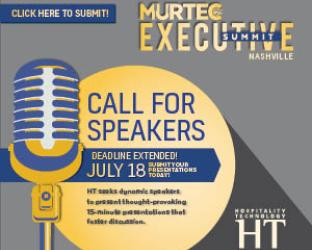