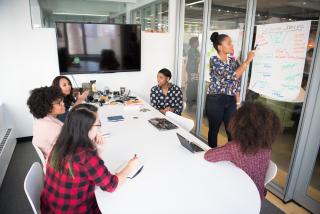 When the Network of Executive Women (www.newonline.org) published Advancing All Women, our initial study of the status of women of color in the American workplace, we found that without intervention, the number of women of color in senior positions would drop over the next 10 years.

We knew that to continue our mission, a stronger base of research was needed. The first study in a series of deeper dives, “A Foot in Two Worlds: Elevating the Latina Experience,” discusses the common biases faced by Latina women from a wide variety of cultures, how those biases might be counteracted, and solutions for employers to better take advantage of their unique skills and abilities.

Latinas in the Workplace

We identified potential friction between the cultural values of Latinas, who are often raised to value the good of the group over the success of the individual, and the conventional values of corporate America.

Latinas may show a reluctance to self-promote, and a focus on achieving the best product possible without worrying about personal gain. Study participants noted that this sometimes led managers to perceive their Latina employees as less ambitious.

The needed correction here is clear: Managers can learn to appreciate these altruistic values, and not overlook women who do not display a ‘hunger’ for promotion.

Being Yourself at Work

The women we interviewed often felt they were told, “Be yourself at work” — only to find that the attributes that set them apart from their white male counterparts were often the ones pinpointed as areas for change.

Bias was also a major issue cited by our study participants, including being discriminated against at work simply for having an accent, (despite 80% reporting that they speak English “well” or “very well”), and for displaying multilingual skills and different cultural attitudes toward fashion, facial expressions, and physical proximity. Latina women earn 54 cents on the dollar compared to men, and while this discrepancy can also be attributed to a number of other factors, it cannot be denied that these biases clearly have consequences.

Despite sometimes difficult environments, our study found that Latina women also see clear paths to improving workplaces, so their unique backgrounds and cultural values can be an asset to their careers and to their companies. Participants cited a lack of mentors and sponsors for them to work with, and an almost complete lack of sponsors from the same cultural background. By creating greater diversity in the C-Suite, corporations can pave the way for greater inclusivity from the ground up.

To serve women of color, corporate environments must be open to women of color. Can any business expect to meet revenue targets for their Latinx audiences without Latinas in the C-Suite?

Diversity and inclusion isn’t just a buzzy phrase. It’s good business. And it’s the right thing to do.