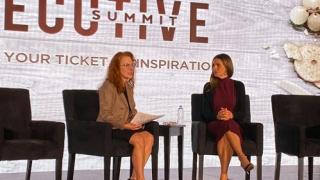 One of the most anticipated sessions MURTEC Executive Summit was a fire chat with Nicole West, VP Digital Strategy and Product at Chipotle Mexican Grill.

During West’s 16 years at Chipotle, the company has launched a digital kitchen, an award-winning app and best-in-class Chipotle Rewards program that has surged to 30 million members since its March 2019 launch, to name a few.

Chipotle latest technology pilots include testing Radius Networks | Flybuy to deliver experience when customers arrive at the restaurant. They also know if you're a rewards member, utilizing real-time data to expedite customers and reduce friction.

Robotics and automation was a big theme at MURTEC Executive Summit (and at MURTEC in March).  West shared how Chipotle is leaning into automation with its robotic kitchen assistant Chippy (deployed in one California location) that fries tortilla chips. As far as what's next, through its $50 million venture fund, Chipotle invested in and is working with Hyphen to automate the make line.

West was one of more than a dozen amazing thought leaders speaking at MURTEC Executive Summit, November 2-4 in Napa, California.

Fresh off her TV appearances on The Today Show, Good Morning America and The Doctors, Deborah Gilboa, M.D., kicked off the event with an inspirational talk about how operators can help retain existing employees and boost recruitment efforts.

Leading restaurant operators shared their first-hand experience with using robots in the back of house in the November 3 panel discussion, Robots Rise Up,

More MURTEC Executive Summit coverage is available here and on Hospitality Technology's LinkedIn page (#MURTECsummit). Be sure to check back as more stories, videos and photos will be shared here in the near future.