During Royal Caribbean Cruises Ltd. Q4 2020 earnings conference call on Feb. 22, the company’s executive board discussed some very positive sailing trends. To begin with, the cruise line took 74 recommendations from its Healthy Sail Panel and used them as the basis for more than 2,000 separate protocols for passenger and crew safety including testing before sailing, physical distancing, disembarkation of symptomatic persons, and more.

“All of these things will give our guests, our crew and the destinations the confidence that the environment on the Royal Caribbean, Celebrity, Silversea or TUI Ship is safer than a walk down Main Street,” said Richard Fain, chairman and CEO.

Fain went on to provide investors with what he says is a powerful positive example of how cruising will be able to safely resume both in the short- and long-term. In Singapore, Royal Caribbean’s Quantum cruise ship has been successfully operating since early December. (The brand has had successful operations in Germany, the Canary Islands, Greece and the Middle East as well.) 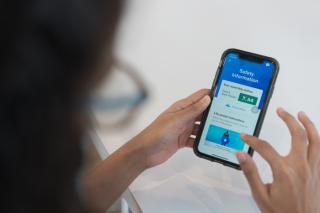 Muster 2.0, available on Quantum of the Seas, reimagines the traditional safety briefing – a process originally designed for large groups of people – into a faster, more personal approach to delivering information that encourages higher levels of safety.

“These early cruises provide valuable information about the best way to design and implement our health and safety protocols,” Fain noted. “They provide important learnings on how we can coordinate most effectively with governments, port authorities, travel partners and others to protect our guest, crew and destinations we visit. These early cruises have also given us the opportunity to design new attractive itineraries where we can better control the experience.”

In fact, Quantum has carried around 35,000 Singaporeans on ocean cruises and “customer satisfaction – ironically --  is higher with our protocols [in place] than it was before our protocols. And our revenue has exceeded our expectations both from a ticket and an onboard revenue perspective,” says Michael Bayley, President & CEO, Royal Caribbean International.

According to Bayley, the success of Singapore’s Quantum cruise ship, in particular, can be attributed to two specific technologies: e-mustering and a contact tracing wearable.

E-mustering allows guests to view a video on their mobile device on how to safely assemble and board lifeboats in the case of an emergency. This prevents large groups of people from congregating together and possibly spreading COVID-19 among guests and crew.

The contact tracing wearable, called Tracelet, allows the ship to see who came into close contact with a COVID-positive guest and for how long.

“And then we have artificial intelligence connected into basically CCTV cameras that use facial and body recognition to then double check and verify contact tracing,” Bayley explained. “We've been fortunate that, that hasn't happened. But that technology development is really, we think, groundbreaking and very sophisticated.”

Apparently, Royal Caribbean isn’t the only one impressed with its technology. According to Bayley, the CDC “specifically asked us to share that technology and what we’ve been doing in Singapore with the, which we’ve subsequently done.”

New to the cruise experience is Royal Caribbean’s Tracelet, a custom wearable required for all guests and crew on board Quantum of the Seas. The technology helps monitor physical distancing and the cruise line’s contract tracing procedures.

During the Q&A portion of the conference call, Fain brought out how they are beginning to see a correlation between an increase in bookings and the increase in vaccinations. While this increase in bookings can be seen among all segments, it seems to be particularly high among who are 65 years old and older likely because they are receiving the vaccine first and are now becoming more confident to travel.

Additionally, COVID-19 cases are falling. This is also building confidence among all consumers that “we’re getting closer to the other side of this, and people are beginning to realize that travel should be here sooner rather than later,” said Jason Liberty, CFO.

As to whom, in particular, are booking travel – Liberty says there is a disproportionate amount of loyalty guests as well as experienced cruisers. However, that doesn’t mean that new-to-cruise guests are missing out.

“We saw an exceptionally high number of new-to-cruise bookings with Quantum, which surprised us, but that's a real positive,” Fain added.

Additionally, when Royal Caribbean asked for volunteers for its trial sailings in the United States, it received more than 250,000 volunteers.

“So there's plenty of people interested in cruising,” Bayley added.

According to Bayley, Royal Caribbean surveyed its crew members last week to get their thoughts on coming back to work and being vaccinated to do so. Royal Caribbean sent the survey to approximately 70,000 employees and had 98% of its crew respond within just a few days.

Most crew members said they wanted to return to work, and 98% of the crew said they were okay with Royal Caribbean requiring staff members to receive the vaccine in order to return to work. It's a stark contrast to a recent study that states one out of three hospitality workers say that they do not intend to take the COVID-19 vaccine. Additionally, 4,000 Royal Caribbean crew members have already been vaccinated.

Bayley found its internal survey results to be very encouraging, and indicative of a smooth, successful transition back to work for the brand.