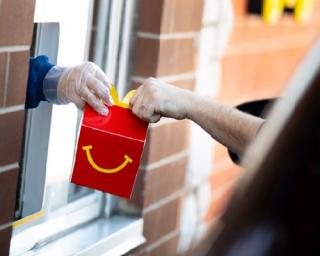 McDonald's customers world-wide are looking a contactless, digital experience, one that they can navigate on their own, says CEO Chris Kempczinski.

McDonald’s Corp. is among the brands seeing increased demand for drive-thru as it is consumers’ preferred way of getting food in recent months.

The global QSR has drive-thrus not only in the U.S., but also in 70% of locations in its top five international markets: Australia, Canada, France, Germany and the UK.

“This safe and convenient service channel has been particularly appealing to our customers during the pandemic,” McDonald's President and Chief Executive Officer Chris Kempczinski said in a Q2 earnings call with analysts. “We've seen significant increases in drive-thru sales in these markets during COVID.”

That’s in line with research by Service Management Group (SMG); its June study of 8,500 adults reveals that more than 75% of consumers surveyed have used a drive-thru in recent weeks.

Drive-thru combined with its digital investments have paid off for McDonald’s.
“And for our customers while safety is a top concern, the need for value and convenience is also on the rise, playing to McDonald's historic strengths,” Kempczinski added.

Executing Operational Changes
“McDonald's is an execution machine,” Kempczinski said. “We know how to run great restaurants and that operating prowess has been put to the ultimate test during the pandemic.”

He detailed the operational modifications made “within a matter of weeks … across 30,000 restaurants, while closing and then reopening another 9,000 restaurants” such as new safety procedures, including  nearly 50 operating procedures in accordance with guidance from state and local health experts, modified menus, and new contactless ways to serve customers.

A Timely Improvement
No doubt those operational changes contributed to customer satisfaction and the global QSR’s ability to decrease wait times. Drive-thru times improved across most major markets averaging 15 to 20 seconds of improvement, Kempczinski said.

For Q2 global comparable sales declined 23.9%. As of June 30, nearly all McDonald's restaurants around the world were open to serve customers. A full Q2 earnings report is available here.

Demand for Delivery
In tandem with growing demand for drive-thru, McDonald’s sees growing use of delivery in all of its “significant markets,” says CFO Kevin Ozan. “We're seeing delivery as a percent of sales go up. Australia and several international markets are at 10% or more. “The U.S. isn't that 10% of sales, but it has grown significantly during the pandemic,” Ozan added. “… We're not seeing either drive-thru, take away from delivery or delivery take away from drive-thru. Both are growing significantly.”

Menu Changes
Among the operational changes, McDonald’s streamlined its menu, which “had a very positive benefit around productivity and margins,” Kempczinski said. In the coming months expect some of those items to be re-added to the menu. “…I think it is a safe bet that you're going to see us add items back to the menu. I think it's also an equally safe bet that we're not going to go all the way back to where we were. And so how that evolution looks is going to vary market to market in the U.S.”

Whether it's the use of kiosk, the use of mobile, the use of delivery, the use of drive-thru, certainly … customers are looking for more of a contactless type of experience.
President and CEO Chris Kempczinski

Ramping Up Marketing
In the U.S., marketing spend was down 70% during the first half of the year, but these funds will now be reinvested in Q3 and Q4. Plus, McDonald’s will also invest an incremental $200 million in marketing spend across U.S. and international markets in the second half to accelerate recovery.

Consumer Behavior: Dine-In
Dining rooms are open in about 2,000 U.S. locations; however reopening additional locations was put on paused as COVID-19 cases surged in certain areas of the U.S. Closed dining rooms have impacted the QSR’s bottom line.

“Pre-COVID, nearly 70% of customer orders were in restaurants across our larger markets. So closing the dining area or even limiting dining capacity has a substantial impact on results,” said CFO Kevin Ozan.

In Australia where dining rooms are open, McDonald’s is seeing increased kiosk usage, Kempczinski said. Looking ahead, “We do believe that dine-in is still going to be an important part of the mix. … Whether it's the use of kiosk, the use of mobile, the use of delivery, the use of drive-thru, certainly … customers are looking for more of a contactless type of experience. They're looking for more of a digital type of experience, one that they can navigate on their own. I do think that that behavior is going to be an enduring change which is why I mentioned that the 3Ds for us: delivery, drive-thru and digital are going to be important strategic priorities for us for the foreseeable future.”