Hoots Wings announced the signing of a 16-unit deal for locations in the greater Philadelphia area. Owned and operated by HOA Brands, parent company to Hooters, the fast-casual wing concept has plans to build on this momentum and bring an additional 50 locations to key markets across Pennsylvania – via strategic franchise partnerships – in in the next five years.

This agreement adds to the exponential growth that hoots wings has planned nationwide, having recently announced its development plans for the state of Texas. In May, HOA Brands' fast casual wing concept signed 6-unit deal for expansion in New Jersey, Rhode Island and Pennsylvania.

The new multi-unit deal sets the brand up to add 16 locations within 20 miles of Philadelphia by 2026 – with the first one or two locations planned to be opened by the end of 2021.

Behind this agreement is ANZ Hospitality, LLC, a Philadelphia-based hospitality company with over 20 years of experience in hotel operations and hospitality management, led by Co-founder and CEO, Chirag Patel and his wife Nilita Patel, CFO. ANZ Hospitality has owned and operated various hotel and motel establishments, and the company is eager to dive into the QSR space.

"Hoots has established itself as a leader in the QSR wings space," said Patel. "With Hooters backing and the rapid growth of the QSR industry, being a part of the early development stages of growth for the brand was the perfect opportunity for ANZ. This deal with hoots wings aligns with ANZ's goals for progression, while bringing our success with employee relations and career growth to the Philadelphia community – we're excited to help accelerate hoots' expansion efforts in the state of Pennsylvania."

ANZ Hospitality's current plan for the 16 locations is to purchase existing restaurant spaces and renovate them into hoots wings' efficient, high-functioning restaurant spaces. This plan speeds up the length of time between lease-signing and grand opening, allowing for a smoother, quicker process for opening locations and cutting development costs in half.

On day 1 of MURTEC, Marc Butler, SVP, Strategic Planning/ Off Premise, HOA Brands, shared recent tech initiatives that have made a difference at Hooters and its fast-casual concept Hoots Wings. That session, Firechat with Hooters, is available on demand in the MURTEC Content Hub.

For example, Hoots Wings also sets itself apart with its simple and effective operations. A hoots wings kitchen only requires two simple cooking platforms to produce the menu, and the POS system seamlessly integrates with all major third-party delivery platforms. 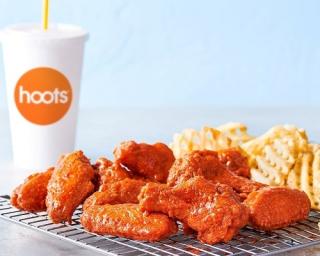