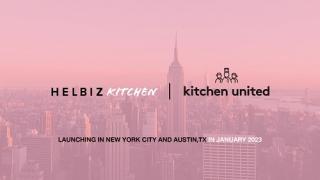 Helbiz Kitchen will launch its menu in NYC and Austin with Kitchen United.

Helbiz Kitchen is partnering with Kitchen United to bring its ghost kitchen offerings to the United States.

Starting in January, users in New York City and Austin will be able to order their favorite food items from either the Helbiz Kitchen app or Kitchen United MIX app onsite kiosk, or website, kitchenunited.com. In each of these cities, Helbiz will bring their diverse set of menus created in Milan — Burger & Sons, Pokaii, Pomodòro, Wabisabi, What the Farm, and La Bottega del Gelato.

Kitchens Heat Up with Virtual Brands

Since its launch in 2015, Helbiz Kitchen has aimed to enter the US market.

“Since the first days of Helbiz Kitchen, our goal has been to expand it to the United States,” said Salvatore Palella, CEO of Helbiz. “We are excited for people in NYC and Austin to experience the cuisine that we have perfected in Milan. Our mission of making Helbiz a super-app by consolidating needs will be built on the dual foundation of mobility and food delivery. It is advanced faster by partnerships with market leaders like Kitchen United who will help continue our high standards of service.”

Helbiz offers a diverse fleet of vehicles including e-scooters, e-bicycles, e-mopeds all on one user-friendly platform with over 65 licenses in cities around the world.