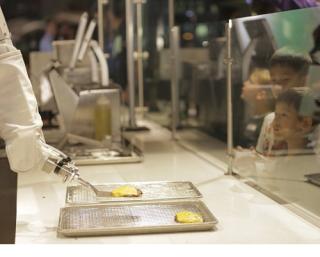 Cali Group, a holding company with ownership stakes in a portfolio of synergistic food and food technology companies, announced today that its restaurant operating subsidiary, CaliBurger, will begin running “Flippy” at its Pasadena location for full day shifts.

Over the course of eight weeks, Flippy has been operating during lunch hours and will begin cooking from 11am to 7pm daily starting today. “We have demonstrated that Flippy can work on our standard equipment and meet high volume demand with substantially greater cooking consistency than our kitchens that have not yet installed Flippy,” said Tony Lomelino, Chief Technology Officer of CaliBurger. “Additionally, we have developed a program to retrain our restaurant staff to serve as ‘Chef Techs’ that work alongside Flippy and monitor the related software and hardware systems. We expect these skills will be useful for employees across our chain to secure higher income jobs that require human / robotic interaction in the future restaurant industry and other industries.”

Since Flippy was first piloted in March, it has cooked thousands of burger patties cooked consistently for customers. Based on the success of this first commercial program, CaliBurger will begin deploying Flippy at additional CaliBurger locations later this year and plans to install Flippy in most of its domestic locations by the end of 2019.

“The collaboration between CaliBurger and Miso Robotics demonstrates how AI-driven robotics will improve food quality, decrease food production costs, and improve the lives of workers in the food industry,” said John Miller, CEO of Cali Group. “We will continue to invest in both companies, with the goal of developing other AI-driven robotic solutions to assist with other tasks at CaliBurger