The use of robotics is experiencing exponential growth with global robotics market revenues forecasted  to grow from $28 billion in 2015 to $151 billion a year by 2020. Tractica predicts the majority of that growth will come from “non-industrial” robots. Scott Langdoc, senior vice president and practice lead at Boston Retail Partners (https://brpconsulting.com), says that the hospitality industry will not be immune to the increasing applications for machines taking on tasks once relegated to humans.

Hospitality Technology’s research reveals that robots are a burgeoning area of interest for hotels and restaurants. According to the 2018 Lodging and Restaurant Technology Studies, one out of four hotels (25%) named robotics a top emerging technology, and 33% of restaurants believe robots will make an impact on foodservice.

“We expect to see a significant increase in the deployment of both customer-facing and efficiency-oriented robots throughout the hospitality industry — both in terms of total robotic units deployed and in the number of hospitality locations using them,” Langdoc states. With dramatic improvements in cost, industrial design, and AI-based engagement capabilities, the number of potential robotic uses cases has tripled in the last 18 months.”

A confluence of factors are driving hotels and restaurants to incorporate non-industrial robots. In addition to costs of the technology leveling off, the hospitality industry has been greatly impacted by the labor crisis in the United States. Recruiting and maintaining staff has become a significant challenge with high turnover and increasing labor costs for hourly workers, plus regulations surrounding what constitutes full- and part-time staff.

Concerns are often stated about how robots in hospitality are the antithesis of what an experience should be — cold and lacking a human touch. Consider, however, the impact turnover and overworked staff can have on a guest experience. Augmenting human service with robotics can empower staff members to turn their attention to guests in more meaningful ways.

John Miller, CEO of Cali Group and Caliburger (http://caliburger.com), blames high turnover rates and having to train and retrain employees as a main culprit taking management away from day-to-day responsibilities resulting in decreased quality of service.

Companies that have deployed robots discover that not only are they useful to execute on tasks, but also they can actually add to the ambience and excitement of a guest’s experience. Caliburger has found that Flippy, its burger-flipping robot, has “driven volume and turns our restaurant into a destination space,” says Miller. Customers come to the restaurant and will take pictures of Flippy in action, he adds.

For Zume Pizza (www.zumepizza.com), a Silicon Valley-based pizza delivery company that uses robots to make its pizzas, the co-founder and president, Julia Collins, has been vocal about how no employee is in danger of being replaced by a robot. Rather, the company, which uses its Doughbot, “the efficient and consistent dough presser that turns any dough ball into the perfect pizza crust,” is hyper-focused on the health and happiness of its customers and employees. In a company statement, Collins asserts, “The Doughbot brings us closer to that goal by allowing us to make each pizza crust five times faster than before while improving the quality of work for staff and speed of delivery for customers.”

Hotel EMC2, part of management company SmashHotels (https://smashotels.com), has deployed two robots — Cleo and Leo — which tie into the hotel’s overall theme of art and science. According to Scott Greenberg, president of SmashHotels, the robots can make the experience more fun. At the hotel, one of the tasks of Cleo and Leo is to deliver items to guests’ rooms.

“In hospitality, presentation of food and amenities often adds joy to a guest’s stay at a hotel,” Greenberg says. “As such, if done correctly, guests can get a big kick from when amenities are delivered from the hotel via Cleo and Leo.”

“We designed the hotel with Hubert [the name given to the robot by staff] in mind,” says Robert Rauch, CEO of RAR Hospitality. “The layout of the hotel includes interior corridors with wireless to ensure Hubert can get around [the robot runs via the wireless].”

Greenberg notes the importance of considering the operations and potential paths any robotic assistants will take. “It’s important to carefully integrate and coordinate the elevator technology and automatic operable door technology when robots are brought into a hotel,” he says.

Beyond operational considerations, the positioning of robots can impact how they are received and interacted with by guests. Visual cues, the way the screen is presented, etc. all factor into the acceptance of the robot.

According to Rauch, having a robot make a delivery should ease guests’ stress because it removes friction and doesn’t require any extra effort. Therefore, understanding how to interact with the robot in the first place should be a seamless experience as well and does not require any staff interference.

“Guests right now are not necessarily looking forward to chatting while in their room or leaving a tip for an employee who is doing their job,” Rauch explains. “They appreciate this is a service we’re providing, and it’s comfortable for most of our guests.”

Automating repetitive tasks and back-of-house operations such as kitchen prep, cleaning dishes, etc. are prime targets for robots. Maidbot (http://maidbot.com), creators of the housekeeping robot Rosie, believes robots are best used for the sorts of perpetual tasks which can be easily delegated and programmed.

Last summer, California-based Calafia Cafe and Market A Go-Go showcased Sally, a salad-making robot that can make 10,000 salad combinations, created by Chowbotics (http://www.chowbotics.com). The company believes that its technology and similar innovations will increasingly be deployed in operations that are dependent upon speed. In the case of Sally, this speed appeals to consumers who want access to healthy food quickly. Sally can now be experienced at Loop Neighborhood Market in Mountain View, CA.

Though social acceptance of robots is increasing and more people are willing to use, touch and interact with them, many worry about what they see as the inevitable loss of jobs as the usage of robots increases in the hospitality industry. Boston Retail Partner’s Langdoc sees this as a challenge.

“The use of robotics must be seen by the guest as an augmentation of guest services, not as a replacement for the human labor element,” he says. “It is paramount that companies deploying robots properly promote and communicate the initiatives to avoid potential negative reaction from guests that perceive the robots are ‘taking away jobs.’”

CaliBurger’s Miller contends that it’s not about a reduction in labor, but rather a redeployment of labor. “More of our staff is able to spend time interacting with guests which is making them happier and leading to less turnover,” he says. Miller believes the robotics are making human labor more productive.

Savioke stresses that Relay allows hotel staff to reduce tedious, time-consuming tasks that take them away from their primary responsibilities, which is accommodating the guests and improving their experiences. Ultimately, the person/robot team works well as staff are there to care for the guest while their robotic counterparts can do the more mundane tasks that take them away from the guests. Rauch has found having Relay make deliveries, “allows staff to focus on the tasks for which they are employed and increases productivity,”

SmashHotels’ Greenberg goes a step further and says that robots are essential to meet ever increasing guest expectations and the inevitable changes they create are part of a dynamic society and will create new avenues for employment.

“This is the DNA of our economy and is nothing new,” says Greenberg, “and we have more jobs now than ever before.” 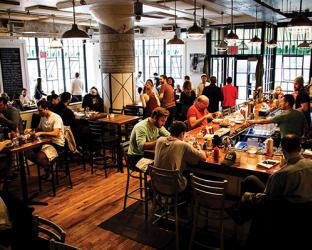