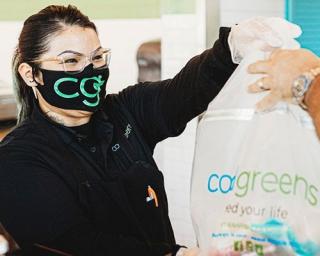 Coolgreens is evaluating different models and footprints to capitalize on real estate opportunities. The brand is finishing up a modular kitchen and line design and is looking to create a prototype that is 40% smaller than its current footprint.

Looking ahead to Q4, Coolgreens is among the brands evaluating different models and footprints to capitalize on real estate opportunities.

With the surge in mobile ordering and preference for off-prem, restaurants are rethinking their brick-and-mortar stores. In some cases that means a smaller or no dining room altogether.

Coolgreens  is looking to create a prototype that is 40% smaller than its current footprint and is finishing up a modular kitchen and line design. With franchisees interested in streamlined prototypes and innovative options like ghost kitchens, Coolgreens expects these new models to account for a huge part of its upcoming franchise development.

During Q3, the healthy lifestyle eatery signed an area development agreement with industry veteran Clay Carson to open 50 locations throughout Austin, Houston and San Antonio in the next five years. In addition, Coolgreens is set to begin fueling the Orlando community with food that "feeds your life" through the franchising of its first-ever virtual kitchen.

In addition, the chain doubled its number of franchise restaurants with three openings, including two restaurants in a new market - Omaha, Nebraska.

Coolgreens has also remained committed to menu innovation. The brand launched its new Ham & Jam sandwich, which has been performing 35% stronger than 2019's highly successful 50/50 Bowl.