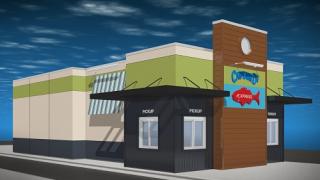 Captain D's Express prototype has a smaller footprint featuring only a drive-thru and walk-up windows for ordering and picking up.

Two of the new locations, scheduled to open mid-year, will be both franchise and company debuts of the new 'Express' prototype, a significantly smaller footprint featuring only a drive-thru and walk-up windows for ordering and picking up. Plus, Captain D's is available for online ordering and third-party delivery. The brand is also continuing its success converting vacant restaurant properties with a recent franchise opening in Elberton, Georgia, and two more conversions planned in Florida this summer.

Looking ahead, Captain D's is focusing its efforts on corporate and franchise development in target markets throughout the South, Midwest and Mid-Atlantic states, including Florida, Ohio and Pennsylvania.

"The team at Captain D's has been hard at work, securing real estate opportunities in thriving markets and setting up franchisees for success to join or expand with us," said Brad Reed, chief development officer for Captain D's. "There is a growing momentum that we're leaning into, and it's rewarding to see both our company-owned stores and our franchisees benefit from our best-in-class support, unique niche in the fast casual space and flexible restaurant prototypes. We look forward to celebrating this success throughout the upcoming year as we open more restaurants, enter new markets and take the brand to increasing heights."

Captain D's signed 16 new agreements in 2021 to develop 40 locations in key markets nationwide. Nearly half of those agreements were with existing franchisees, whose success amid strong sales comps system-wide continues to be a driving force behind the company's accelerated growth. Captain D's also celebrated milestone restaurant openings in 2021, including the brand's first double drive-thru in Tupelo, Mississippi, first Chicago-area location and multiple cost-effective conversions.