By all accounts, “Q1 was an exceptional quarter for Starbucks.”  In a quarterly earnings call with analysts, President and CEO Kevin Johnson cited the winning formula: a “healthy balance” of comparable sales growth, new store development, plus the expansion of its Global Coffee Alliance with Nestlé for its retail line. However, that good news was tampered by the announcement of the closure of 2,000+ locations in China in response to the Wuhan coronavirus outbreak.

In the first quarter, Starbucks delivered global revenue growth of 9%, led by strong comp sales growth of 5% and net new store growth of 6% over the last 12 months. Leading the charge were the U.S. and Chinese markets.

For Q1, the U.S. grew revenues by a 9%, led by comp sales growth of 6%, including comp transaction growth of 3% for a third consecutive quarter.

”With a two-year sales comp of 10% for the past two consecutive quarters, it is clear that our focus on the customer experience, beverage innovation and digital customer relationships is working,” said Johnson during the January 28 call with analysts. 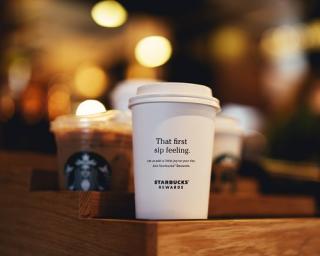 During the quarter, Starbucks US added 1.4 million customers to its 90-day active Starbucks Rewards member base, ending the quarter with an impressive 18.9 million active members, a 16% increase over the prior year.

“This is important because we know from experience that when customers join our rewards program their total spend with Starbucks increases meaningfully,” explained Johnson.

As consumers increasingly seek convenience and speed, the number of mobile order and pay transactions increased 17%.  “…Our industry-leading digital platform will further differentiate us from the competition over time,” said Johnson.

In light of the Wuhan coronavirus outbreak, Starbucks has temporarily shuttered about half of its 4,500 locations in China. When asked about the impact to Starbucks’ future earnings, CFO Pat Grismer stated the obvious, “It really is difficult to say at this juncture what the impact to our business will be and how it will show up in our financials given the fluidity of the situation.”

The temporary closures come on the heels of impressive numbers in the Chinese market: Q1 revenues increased by 15%, excluding a 2% impact of foreign exchange, fueled by a 16% increase in net new stores over the past 12 months and a 3% increase in comp. Total transactions grew at a double-digit percentage pace for the fourth consecutive quarter.

Chinese consumers too are embracing mobile orders, which skyrocketed to 15% of total revenue, up from 10% the past quarter with 9% coming from delivery and 6% from mobile order and pickup.

Starbucks Rewards is also growing like wildfire in China: the market’s 90-day active Starbucks Rewards members reached 10.2 million customers in Q1. “That's 40% growth over the prior year when the program was relaunched,” said Johnson.

Last month, Starbucks revealed its aspiration to become a resource-positive company, which means the company want to give more than it takes from the planet.

In other news, gift card activations delivered their strongest year-over-year dollar growth in four years, said Johnson, adding that the quarter’s 3% ticket growth was led by pricing, beverage and food.