The fast-casual burger chain will open its first drive-thru next year and is adding walk-up windows and expanding curbside.

Shake Shack is putting its off-prem strategy on steroids as its looks to jump start sales in the new normal.

With more than half of its 172 U.S. dining rooms closed, Shake Shack is ramping up its off-prem strategy to include walk-up and drive-up windows for digital orders and plans to debut its first drive-thru next year. This “Shack Track experience” is powered by enhanced digital ordering.

“Our intent is to further the progress we've made during COVID-19 across digital channels and to facilitate more preorders with a seamless pickup experience,” said CEO Randy Garuttti in a Q2 earnings call with analysts.

The move comes as the majority of consumers prefer to pick up off-premise orders. With dining rooms closed (or closing again), drive-thrus have dominated off-prem, according to Service Management Group’s (SMG) June study of 8,500 consumers. More than 75% of consumers surveyed have used a drive-thru recently, and more than half of respondents have used carryout and curbside pick-up.

About three weeks ago, the fast casual brand began testing curbside at 10 locations and plans to up the number of participating Shacks to 50 by the end of Q3.

“For the first time, guests can preorder on the app, identify their car, and we'll bring their order out to them with contactless pay and handoff,” said Garutti.

Curbside, Garutti said, is “a solid addition” as guest are increasingly concerned about safety and seek out experience that make them feel safe.  “We are going to live that way for a while,” he added.

Walk or Drive This Way

The Shack Track experience is curbside pickup, walk-up or drive-up window, or is an improved in Shack pickup area in-store. New and existing stores will have variations of the Shack Track Experience. More than 80% of exisiting locations have the opportunity for some type of outdoor dining.

“Through the end of this year, we'll expect to add at least eight Shack Track pickup walk-up windows to existing Shacks as well as add our first drive-up Shack Track as we reimagine our Vernon Hills, Ill., Shack where guests leave their car,” said Garutti.

For 2021, about half of new stores will have either a drive-up or walk-up window; the remaining Shacks will have an enhanced interior pickup curbside and/or dedicated delivery courier pickup areas.

The new year also brings a new format. “We'll be building our first ever drive-thru experience in 2021,” said Garutti. “And we hope to execute more of these in the future as we learn.” Locations have not been announced, but Garutti said to expect suburban, high-traffic areas.

“As we look ahead, our goal is to increase the addressable market opportunity for Shake Shack, while driving strong AUVs and returns on capital. We're still in the early days for Shack Track, drive-thru and enhanced pickup models. And we have a lot of learning in terms of sales and throughput we're bullish about the potential white space opportunity these formats could create while meeting the evolving needs of our fans,” he said.

Q2 was tough for the fast casual brand. Shake Shack's sales for Q2 were down 39% vs the year prior and same-store sales dropped 49%.  A full earnings release is available here. About 95% of its U.S. stores are open and about half of those have reopened for interior dining.

During Q2, total digital sales represented 75% of sales, more than doubled vs. Q1. Its native web and app channels more than tripled compared to the same period last year.

For fiscal July, digital sales represented 62% of total sales, retaining over 90% of the digital sales achieved during fiscal May, even as in-store sales have gradually returned.

The brand raked up more than 800,000 first-time purchases via its app and web channels since early March. “This is nearly 4x higher than the same period last year,” Garutti explained. “We're delighted with these results, and we're planning for digital sales to remain a significant component of our business and ongoing growth."

The brand plans to rebuild its web and app functionality over the next year to allow additional personalization, feedback and real-time order status. "But the most important new feature will be the ability to offer delivery directly through our own channels for the first time, targeted at keeping guests within our native infrastructure and deepening our ability to connect directly with them over time,” Garutti explained. 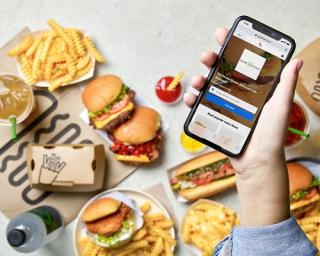 Shake Shack uses third-party delivery and plans to debut it own delivery in the next 6-12 months.

Low Down on Delivery

Garutti was very complimentary about Shake Shack partnerships with third-party delivery platforms. “We have great relationships with all the major delivery carriers, really excited with the growth of most recently of Uber Eats. … We're excited with how that's going. I think as Shack has come up, and our own channels continue to grow, delivery will likely settle in a very comfortable place, still much more elevated than it ever was and we're excited about that.”

Within six to 12 months, the brand is also looking at launching its own delivery channel through its mobile app. “We don't have a specific launch date,” Tara Comonte,President and CFO, said. “…Like most new functionality, we will test it in different way and different places. …It's very much on the roadmap.”

The brand opened 9 new stores so far this year.

“COVID-19 effectively cuts our development plan in half for this year from our original guidance,” said Garutti. The brand plans to open 6-11 additional domestic company-operated Shacks this year.

All Shacks right now in Hong Kong, Mainland China, Japan and Korea, with the exception of an airport location in Korea, are open. “It's an ever-changing situation. And even this week, we've seen Hong Kong close and then partially reopen dining rooms again due to recent spike in cases,” Garutti said. “Our domestic license business, Shacks and airport, stations and roadside, remains the hardest hit in our portfolio. With just half of our airport locations now open and operating at severely reduced sales, while air travel remains at a fraction of its pre-COVID-19 level, and nearly all of our domestic stadium venues remain closed.”