According to Travel Weekly and USAToday, Royal Caribbean Cruises recently discussed the new technologies making their way aboard its ships. As early as this year, passengers on the Oasis and the Allure of the Seas will be able to use a mobile app to check-in, order drinks and reserve excursions and dinner reservations. The check-in process will be particularly seamless as it will allow the passenger to walk onto the cruise ship without having to stop at any desk, as long as they have their phone in their pocket with the mobile app downloaded. The app will pair with a facial recognition system at the pier to verify their identity as they head to the gangway. Similarly, as passengers approach their room the mobile app will automatically unlock the door, without the passenger having to pull the app out of their pocket. The app won't be available to all of the company's ships, however, until 2019. But at least half of them will have access within 2018. The mobile app will also allow passengers to track their luggage, open cabin doors and even text fellow passengers.

The mobile app is meant to give passengers an extra day of vacation. Instead of spending it checking in, booking excursions, and making reservations – they can head to any of the ship's amenities and begin enjoying them immediately. For passengers that do want to do things the old-fashioned way, for example: check-in on paper and get a keycard, those services will still be available.

Staterooms are also getting an upgrade with smart speaker systems similar to Amazon's Alexa which will allow passengers to turn lights on and off or open and close shades with voice commands. If passengers don't want to talk, they can use the mobile app to control the lights, shades and temperature as well.

For the near future, Royal Caribbean is investigating the idea of a virtual restaurant. Passengers would eat their meal while using VR headsets. The point would be to transport passengers to an area representative of the food their consuming, ostensibly improving the gourmand experience. For example, eating German food while the VR headset shows the passenger at Oktoberfest in Germany. The company is also considering new ways of implementing digital signage and high definition videos to create the illusion of a real balcony with the ocean going by, or a screen on the ceiling showing the sky above. 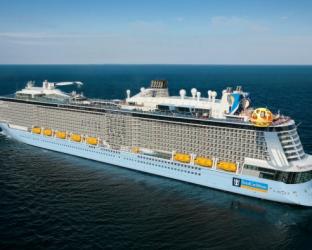