The Rise of Social Hospitality

The Rise of Social Hospitality

By Abigail A. Lorden, Editor-in-Chief and Dorothy Creamer, Managing Editor - 08/06/2014
Get great content like this right in your inbox.
Subscribe
Just like the metaphor warns about ripples on a pond, social media comments have a far-reaching effect. For service industries such as lodging and foodservice, guest commentary offers endless potential as a direct sightline into what is being done right — or wrong. Today’s guests are often quick to head to social sites to either praise or lambast everything from service to quality. This consumer-generated content has given new meaning to the term reputation management. What originated in the public relations field to describe messaging through traditional news media, today includes a vast ‘socialsphere’ of two-way dialogue.

Data from HT’s just-released 2014 Customer Engagement Technology Study indicates that more than 90% of hotels and restaurants actively participate in social media.  The percent that works with technology to monitor and analyze content is small, but growing — today, just 21% of restaurants and 17% of hotels. However, the study also shows that investment is heating up in the field of social loyalty, where companies can reward consumers for their social activity. For both hotels and restaurants, building out a social loyalty platform will be a priority in 2015, according to the study. Integrated reputation management tools will likely become more common as hotel and restaurant brands put monetary rewards on the line in exchange for social activity.

Some hospitality companies have already turned to technology to help mine this vast field of data and feedback, and to proactively manage their social reputations. Social reputation management (SRM) technologies are helping them turn what can be a labor-intensive process into one with robust mechanics to monitor and respond to incoming messages. These companies are now able to respond in real-time and can send feedback to the appropriate brick-and-mortal location or corporate department.

In this exclusive look at “social hospitality” HT caught up with executives from Domino’s Pizza, Papa Murphy’s, Shangri-La Hotels & Resorts and others, for a peek inside their experiences with reputation management in a vast socially-constructed landscape.

Labor Intensive Meets Time Sensitive
When something happens to diminish the customer experience, speed is vital. According to The Social Habit (www.socialhabit.com) a social media research site, 42% of consumers complaining via social media expect a 60-minute response time and 32% expect a response within 30 minutes. Research from the site also states that 57% of people who post a complaint on social media expect the same response time at night and on weekends as they would receive during normal business hours. The challenge with this dynamic is that an engaged, proactive social media presence requires ongoing diligence and can be labor intensive. When time-sensitive meets labor-intensive, manual methods need a degree of automation. Technology is helping companies bridge this gap.

In 2013, Domino’s Pizza (www.dominos.com) began working with a social media management tool, Astute SRM from Astute Solutions (www.astutesolutions.com) and increased its volume of social activity by 128% over the previous year. Astute SRM automatically searches for hundreds of Twitter keywords and constantly monitors Domino’s Facebook wall to find posts that need attention, which is on average less than 3% of total volume. When Astute SRM finds one of Domino’s preselected “alert” keywords, it sends an instant notification to the Domino’s team. Before using Astute SRM, agents manually sorted through social media posts — a time-intensive and inefficient exercise.

“Astute SRM allows us to hear concerns and intervene quickly to make things right, even on nights and weekends,” says Terri Haffey, customer care manager for Domino’s Pizza. “That has a big impact on long-term customer loyalty. Faster interaction means higher praise from our customers.”

While speedy response times do play a big part in diffusing bad experiences, don’t underestimate the mere act of responding by itself.  “It’s all about the guest connection and letting them know that we’re listening and saying we’re going to take action,” says Erin Pepper, director of guest relations for Le Pain Quotidien (www.lepainquotidien.com), a 200-location global French bakery and restaurant. “A lot of times guests post something negative and they don’t want anything. They just really want you to know how they feel about your business. Saying ‘thank you for your feedback, we are going to fix this’ can turn them around right away.”

Route incoming comments
By nature, consumer generated content will address everything imaginable — from general customer service questions to comments about food quality; from menu suggestions to immediate service delivery issues. Incoming messages need to be funneled to the appropriate teams to ensure that the information isn’t lost in the wrong department. Papa Murphy’s (www.papamurphys.com) uses Expion (www.expion.com) to manage its social media. When a message requires a response, Expion’s escalation and tasking function routes the message to the right person, which limits back and forth and leads to more direct customer interaction.

“The added efficiency allows us to be more attentive to guests and serve an increased number of customers,” says Jayson Tipp, senior vice president, marketing, strategy and technology at Papa Murphy’s. “We’re able to make sure comments and suggestions are delivered to the proper team and questions or issues are responded to quickly.”

JC Resorts (www.jcresorts.com) operates four resorts in California: Rancho Bernardo Inn, Surf & Sand Resort, Temecula Creek Inn and Scripps Inn. The company uses Revinate (www.revinate.com) to monitor social commentary across locations both at the property-level and at corporate.  Information comes in through a single portal, but is also funneled down the individual department. “We use a review consolidator that allows us to see and respond to all reviews through one portal,” Melinda Speck, corporate director of marketing, states.

However, managers from various departments have access and the system will ping them when a review comes through. Each manager is responsible for responding to something that pertains to them. On the corporate level JC Resorts ensures that comments are responded to in a timely manner.

In addition to funneling input to the right department — such as  culinary R&D for menu ideas or guest relations for a service issue — reputation management can also expose areas of strength or weakness at the unit level. Le Pain Quotidien uses the full suite of products from New Brand Analytics (www.newbrandanalytics.com) to get location-level reporting. “It’s been really helpful to create reports for the operator and sit down to dissect the different areas,” says Pepper. “If we see a steady flow of service issues, such as guests complaining about slow service at a specific location, we are able to dive into what the issue is and where it lies.”

Measure, report and compare
Instant response aside, one of the long-term benefits of an engaged social monitoring campaign is the robust level of data that can be obtained, about a company and its competitive set. This type of crowd-sourced data could only previously be obtained through costly focus groups and feedback campaigns.

Shangri-La Hotels & Resorts (www.shangri-la.com) owns and/or manages more than 80 five-star hotels.  In the luxury segment, guest reviews are central to maintaining an impeccable reputation. The company uses DigiMind (www.digimind.com) to observe posts from across channels. “It pulls posts and analyzes what people are saying about us,” Michael Leong, vice president of digital marketing, explains. “We can drill down to individual hotels, but it also gives us a view of how our brand is doing overall.”

Shangri-La is taking its reputation management one step further to do comparative analysis. The company uses Brand Karma (www.brand-karma.com) to monitor its reputation on sites like TripAdvisor as well as pre-set local competitors. The system pulls reviews, using sentiments and comments ranging from very positive to neutral and negative. It analyzes those and scores the hotel on a comparative matrix. “For example if a guest mentioned check-in service very positively or negatively, Brand Karma scores this — and does the same for other competitive hotels — so that all the hotels in that set would be evaluated identically,” says Leong. “It gives us a comparative view to how our hotel stacks up to others.”

JC Resorts’ Speck reinforces that much of the value comes when you can turn social dialogue into data. “We can see trends quickly, and can see what our guests think about what we’re doing,” says Speck. “We get feedback instantly and can adjust based on what we see in a big cache of data.” Gathering feedback and reacting to it is happening much faster with these sorts of resources, she says; “faster than it was even three years ago.”

RELATED ARTICLE:
So you Want to be a CDO (or Not)? 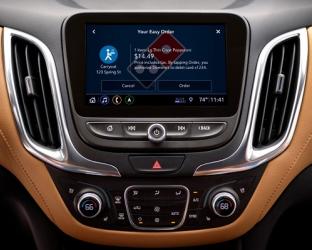