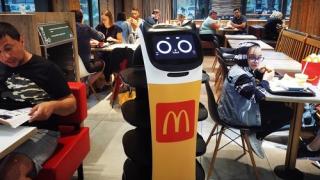 McDonald's Slovenia has added dozens of Pudu's BellaBot robots to the workforce, to assist staff with the serving and delivery of food as well as to perform other duties. Photo credit: Pudu Robotics

McDonald's locations in Slovenia are now using a team of robots from Pudu Robotics.

At the end of 2021, McDonald's Slovenia started gradually introducing dozens of Pudu's BellaBot robots into the workforce, to assist restaurant staff with the serving and delivery of food items as well as to perform other duties. The video of BellaBot delivering food at McDonald's has gone viral on TikTok, with millions of views worldwide.

Robotics on the Rise

McDonald's Slovenia is the latest restaurant brand to put robots to the test.  Other recent adopters include: Wing Zone, which will make Flippy 2 a part of the chain's standard build for all future restaurant locations.QSR Jack in the Boxis using robots to work the fry and drink stations. Tech innovatorChipotle is testing a Robotic Kitchen Assistant. After a successful pilot program,White Castle will add the fry flipping robot Flippy to 100 locations.

The McDonald's Slovenia/Pudu deal set was up by its local exclusive partner ARONAtm. The Chinese robotics company has also worked with other partners across multiple industries to steadily expand its presence in Poland, the Netherlands, the UK, and other European countries.

Expectations for sanitary and safety conditions have grown exponentially. With these concerns in mind, McDonald's Slovenia decided to use AI-powered food delivery robots. In addition to lower cost and higher efficiency, "hiring" the robots also reduced person-to-person interaction and, thus, the risk of virus transmission. The move has proven a winner, with added convenience for customers alongside a boost in the evolution of the brand across the intelligent foodservice ecosystem.

Moreover, BellaBot, serving as a concrete example of the new intelligent business model, has also been engaged in multiple tourism promotion campaigns launched by the government of Slovenia and its tourism offices.

Just since the beginning of the year, Pudu Robotics has signed agreements with the Coca-Cola Bottling Company of Jordan, Metro Group's Media Markt, Japan's Skylark Group, Shell Poland, and other well-known brands. To date, Pudu Robotics has shipped over 40,000 of its robots around the world. Pudu Robotics' presence being expanded from the foodservice sector into cleaning, disinfection, and building services is expected to increase the company's user base and pave the way for the creation of robots that enhance both human productivity and daily life quality based on customer demands.