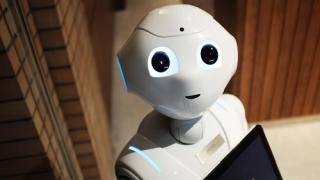 The Time for Robots?

Many in the hospitality industry are wondering if robots will help end hospitality’s labor shortage.

“It’s time to start paying attention” to robots and their role in food delivery, said Joe Tenczar, CIO at Sonny's BBQ and Co-Founder Restaurant CIOs, who shared his prognostications during the MURTEC session, What's Next in Universal Solutions for Restaurants?

Hyphen was built by some of the world’s top talent in robotics, foodservice, and food-tech from companies like Apple, Sweetgreen, SpaceX, Tesla, Uber, Instacart, Postmates, and more. Hyphen’s Makelines will deploy across the country this winter.

The first incarnation of Hyphen was a company called Ono Food Co., a robotic food truck with a mission to make healthy and delicious food as affordable and as ubiquitous as fast food.

Within months of Ono’s launch, the COVID-19 pandemic forced shelter-in-place, and co-founder and CEO Stephen Klein decided to halt operations, take a step back, and think about what a post-COVID world meant for the restaurant industry. Within months, they decided to pivot the business to focus on an enterprise solution.