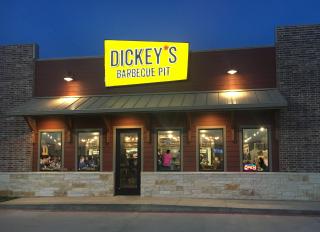 Like all good things, it started with a used $500 Lay’s potato chip truck.

The year was 1969, and Dickey’s BBQ, founded 28 years earlier, was growing under the guidance of Brothers Roland and T.D. Dickey, who’d taken the reins from their founder-father Travis Dickey two years prior. As Dickey’s BBQ began to expand beyond its first location in Dallas, the brothers saw the potential and power of bringing the food to the people — instead of the people to the food.

But it was a move borne of necessity, at its core. “They thought outside of the four walls to save the store,” Michelle Matthews, vice president of direct sales, explains. “It was a great way to bring their BBQ to the people when they weren’t getting the foot traffic yet."

Today, Dickey’s catering has grown from its humble potato-chip-truck origins into a robust business. The 600-store chain generated about 10% of its business from catering, a number that has jumped to 15% since partnering with the ezCater online ordering platform five years ago. The chain’s best performing stores see catering figures closer to 20%, Matthews adds.

ezCater, available through desktop and mobile web as well as via an iOS app, shows customers each restaurant’s on-time ratings and reviews. It aims to take the guesswork out of group catering by displaying the businesses that cater in the user’s area and enables filtering by other criteria such as budget and type of food.

For Dickey’s, the ezCater platform has been enormously effective in increasing brand awareness. “It has expanded our customer base,” Matthews says. “I can guarantee that someone eating Dickey’s at a catered event hasn't been to one of our stores before.”

She describes the ezCater partnership as a “win-win.” She explains, “It’s a marketing investment with guaranteed ROI, which you can’t say about most marketing spend, like a billboard.”

Currently, roughly 80% — about 415 — of Dickey’s stores participate on ezCater and the BBQ enterprise proactively tries to get stores on board. Despite the eye-catching numbers — Dickey’s has seen 400% year-over-year growth through third-party vendors such as ezCater and Grubhub — some franchisees are slow to sign up.

“Not everyone is an early adopter,” Matthews explains. “Sometimes owners are apprehensive about the system until they try it.” Because ezCater doesn’t require a contract, it’s easy to trial without a commitment.

Dickey’s sees strong ticket averages stemming from ezCater orders, which are split about 50-50 between business and residential events. The BBQ chain gains repeat customers as a result of catering through ezCater, Matthews says, as well as steady incremental sales. The nationwide platform is particularly helpful for professionals, such as pharmaceutical sales reps, who travel regularly and host events in various cities.

Despite the popularity with on-the-go workers, ezCater users — often desk-bound office managers and administrative assistants — tend to favor the desktop site, though that’s changing as mobile-first Millennials enter the workforce.

Matthews says it would be helpful to have an ezCater API at some point so that real-time sales data feeds directly into Dickey’s POS. “That type of integration would eliminate manual reporting,” she adds.