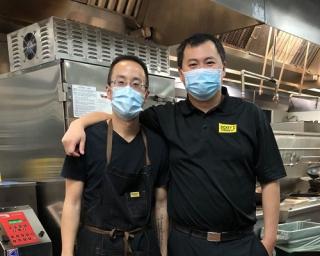 Dickey’s Barbecue Pit is now available in San Francisco after the franchise opened two of eight virtual kitchen locations planned for the area.

Ghost kitchens are projected to reach a $1 trillion global market by 2030, according to Euromonitor research. Restaurants are looking at ghost kitchens or virtual kitchens to expand their brand and to add sales without the overhead costs of opening a brick-and-mortar store.  At Restaurant Next, during the panel discussion Host Kitchens Heat Up, three execs shared how their 3 different virtual concepts are adding revenue to the bottom lines.  All Restaurant Next educational sessions are now available in the Restaurant Next Content Hub.

Father and son restaurateurs John and Max Lee opened their first two Dickey’s locations in November and their initial openings are two of nine total virtual locations they plan to open in the U.S. The family franchisees have signed development agreements to open seven other virtual kitchen Dickey’s locations in the San Francisco Bay area and one more off-premise based unit in Las Vegas.

In addition, the two are setting their sights on bringing Dickey’s, authentic Texas-style barbecue to the Southeast Asian countries of Myanmar, formally known as Burma, and the Philippines. Earlier this month, the Lees entered into a letter of intent with Dickey’s to develop close to 100 locations in both countries with the first one scheduled for the capital of the Philippines, Manila, around late next year.

“We’re proud to have this family team join our family brand and we look forward to a successful partnership sharing our fan-favorite barbecue with millions of new guests here in the U.S. and across the globe,” said Laura Rea Dickey, CEO of Dickey’s Barbecue Restaurants, Inc.

Barbecue fans in the surrounding 10-mile area will be able to get their Dickey’s fix by ordering delivery directly to their doorstep through dickeys.com, the Dickey’s app or dialing the store by phone.