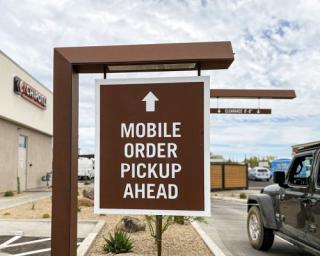 Chipotle Mexican Grill will open its 100th Chipotlane, the brand’s drive-thru digital order pick-up lane, later this month. The milestone restaurant is in the greater Columbus, Ohio area, where the concept was first introduced in 2018. The new restaurant in Sunbury, Ohio, will feature the brand’s open design, eco-friendly materials, and premium placement for digital pick-up shelves.

Of Chipotle’s 19 new restaurants that opened during the first quarter of 2020, 11 featured a Chipotlane, giving the concept a presence in 32 states. Chipotlanes are expected to be included in more than 60% of new Chipotle restaurants. Despite stay-at-home orders in recent months, Chipotle successfully navigated the first quarter with digital sales growing more than 80% year over year. Due to an increase in digital business, restaurants featuring a Chipotlane require more staff than traditional Chipotle restaurants. To support the brand’s growth, Chipotle plans to hire as many as 10,000 employees over the next few months, including hourly and salaried management positions as well as crew.

“Customers want convenience and appreciate the ability to personally retrieve their orders without leaving their car,” said Scott Boatwright, Chief Restaurant Officer. “With a dedicated team and kitchen devoted to digital orders, we need to continue to grow our workforce to support the increasing demand, especially in locations featuring a Chipotlane.”

The company’s ‘We Are Open. We are Growing. We Are Hiring’ campaign kicked off in May and has resulted in approximately 8,000 hires to-date. Since the beginning of the year, Chipotle has received close to 700,000 applications nationwide due to its best in class benefits and inclusive culture. Ranking number one among quick serve restaurants for top COVID-19 safety measures, Chipotle’s people-first mentality has made it a top employment destination.

“Today’s purpose-driven culture has created an expectation from people who are looking to work for companies that align with their values,” said Marissa Andrada, Chief Diversity, Inclusion and People Officer. “At Chipotle, we are dedicated to cultivating a better world not only through our food, but through our people.

Additionally, Chipotle is utilizing the signage for its new restaurant openings as an opportunity to showcase the work of emerging artists across the country. Instead of the traditional “coming soon” message, those passing by new locations prior to opening will see real illustrations of farms and natural ingredients, beginning with Josie Portillo, a Salvadoran-American artist based in Los Angeles.