New research finds that 75% of U.S. theme park visitors say they often or occasionally decide against buying food and beverage on site because of queuing, while 65% take the same view with regard to buying merchandise.

However, theme parks could see visitors increase spending on food, beverage and merchandise with the availability of consumer-friendly technology solutions, according to Omnico research.

Those who would spend more with a tech-enabled experience would boost spending from $45 to $250 per head on food and merchandise if mobile apps, self-service kiosks and robot deliveries to avoid queues were available, the research reveals. The figures are part of the Omnico Theme Park ROI Barometer, which surveyed 683 consumers from the United States who have visited a park within the last two years, along with 2,653 from the United Kingdom, Japan, China and Malaysia.

Retail spending, for example, will increase from an average $24 to $64 per head if mobile self-scan apps and self-service kiosks are available in park stores. And expenditure on food and beverage will increase from $21 to $59 if the same technologies are implemented in fast-food outlets or restaurants.

If virtual reality guides and experiences, or artificial intelligence-powered recognition systems are used to make their visits easier, 43% of US visitors say they will spend up to four times more than average on an admission ticket.

Almost 90% of Theme Park Visitors Want Artificial Intelligence, Virtual Reality to Be a Part of Their Experience

Consumers expect theme parks to use artificial intelligence, biometrics to verify their identity and remove the hassle factor from their visit.

Disney, Verizon to Turn the Cellphone into Theme-Park Visitor's Tool

The Happiest Place on Earth will soon know where in the world you are. Disney visitors would be able to download an application to their mobile phones to plan trips and recommend activities or restaurants, writes Dawn C. Chmielewski of the Los Angeles Times. 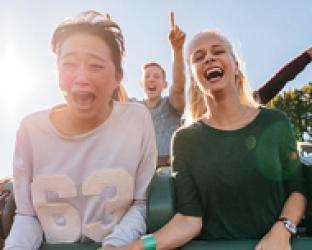 Eighty-five percent of theme park visitors from the United States, U.K., China, Japan and Malaysia want theme parks to use AI systems for ID verification so their visits are as trouble-free as possible.

Consumers are willing to pay 20% extra, double the industry average, to stay at Disney and Universal Theme Parks because they offer an escape from the real world through ingenious use of technology.