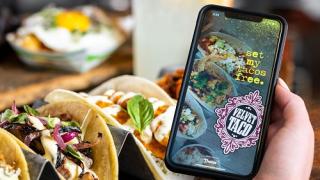 Velvet Taco, the Dallas-based fast-casual restaurant serving inventive and globally inspired tacos, collaborated with Thanx, a provider of guest engagement technology, on a vision to offer non-traditional discounts while keeping guests engaged and rewarded for their loyalty.

The Velvet Room, Velvet Taco’s loyalty program which launched in November 2021, offers a tiered, visit-based program that rewards guests with unique offerings and VIP experiences without leaning into traditional discounts. The program also plays a vital role in guest data capture, which gives leadership a complete picture of their guest’s behaviors and spending habits.

“From the name of our program to the experiences we provide as part of our incentives, The Velvet Room is distinctively tailored and personalized to our guests,” says Cassie Cooper, Velvet Taco’s Director of Marketing. “We are excited about the additional loyalty perks we can now offer our fans through the mobile app, which has proved successful especially in locations with drive-thru or pick-up window locations by allowing them to order off-menu without having to come inside.”

The Backdoor “Secret” Menu features six secret menu items currently, three of which include Nashville Hot Cauliflower, Black & Blue Burger, and the Hangover Burger – all in which were born from the brand’s popular Weekly Taco Feature menu, better known as the WTF.

The Backdoor “Secret” Menu is not on third-party platforms. This perk is only for dine-in and The Velvet Room mobile app users.  The same exclusivity goes for the WTF menu.

[75% of consumers prefer to order delivery direct from the restaurant,according to HT's 2021 Customer Engagement Technology Study.]

Cooper adds, “We found a partner in Thanx because they were equally as passionate about building a program that improved our bottom line without relying on traditional discounts and instead moving towards offering exclusivity and access to our guests.”

Additionally, the Backdoor “Secret” Menu allows Velvet Taco’s fans to earn rewards in a way that both engages and incentivizes guests to order directly, instead of using bottom line-disrupting third party services. Guests can also earn a chance for an all-paid trip to Dallas to participate in a taco tasting – the more points earned through The Velvet Room, the better the chances. Learn more here.

Part of Thanx’s capabilities allow Velvet Taco to offer non-traditional and traditional perks, such as access to exclusive merchandise, complimentary red velvet cake on birthdays, exclusive access to WTFs, a WTF tasting for the top five loyalty members, and a few more experiential perks only offered at Velvet Taco not yet announced.