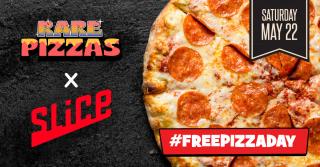 Slice, the platform powering independent pizzerias, and PizzaDAO, a community of digital artists creating pizza NFTs, announced  they will give away more than 2,500 free pizzas across all 50 states to celebrate Bitcoin Pizza Day through the Rare Pizzas project NFT project.

May 22nd marks the 11-year anniversary of the first Bitcoin transaction, in which Laszlo Hanyecz paid 10,000 bitcoin for two slices of pizza. Today, one Bitcoin is worth nearly $36,000 USD. Just last month, Bitcoin climbed to the highest it's ever been at $63,000. At its peak, Laszlo's two slices of pizza would be valued at $630 million. What Laszlo paid for two slices of pizza, could have bought him more than 31 million pies from independent pizzerias through the Slice app.

To celebrate this historic pizza transaction, Slice and Rare Pizzas will be dishing out more than 1 bitcoin's worth of pies made by local pizzerias across the U.S. to more than 2,500 lucky pizza-lovers in the crypto community. The pizzas will be funded from community donations and sales generated through NFTs created by members of the Rare Pizzas collective. The goal is to support local pizzerias that have been hit by the pandemic while connecting artists, developers and pizza lovers who want to give back to independent pizzerias on Bitcoin Pizza Day.

The Rare Pizzas project, brought together a group of 300+ digital artists who have been creating digital collectible pizza NFTs since March 2021, with a vision of turning the funds from their pizza-art into actual-pizza for the masses. Together, Slice and PizzaDAO, are making that vision a reality by driving orders to local pizzerias in the Slice network and distributing over $55,000 worth of pizza to Slice customers.

Rare Pizzas has raised over $1.25M to date and, like Slice, is on a mission to support local pizzerias.