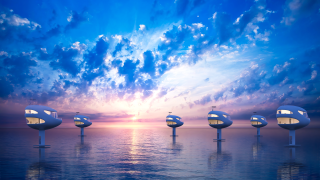 For three-and-a-half years, Grant Romundt – co-founder of Ocean Builders – lived in a floating home in Toronto.

“I found it as an Airbnb and was only going to stay one night. Then I extended my stay for a week, then for a month, then for a year. Eventually, I ended up being there for three-and-a-half years,” Romundt explains. “I just loved the lifestyle, it was an amazing way of living. And everyone who came to visit me fell in love with the house as well. I only moved out to start Ocean Builders.”

Currently residing in Panama, Romundt and his co-founder Rüdiger Koch are working to build eco-restorative floating homes called SeaPods. These structures are meant to float a few kilometers off the coast and must reside outside the hurricane zone.

These living spaces offer 830 square feet of living space proportioned over two-and-half floors, seven-and-a-half feet above the waves. Included within each SeaPod is a master bedroom, living room, kitchen, bathroom and patio. Additionally, each SeaPod comes with 1,250 cubic feet of storage space. But what really makes these structures interesting, is the amount of technology that Romundt and Koch have thoughtfully integrated throughout each home.

“Each pod will act as a digital assistant that will come to know and understand the owner better with time,” Romundt notes. “This is possible because of the vast number of technology integrations that have been built into the home.” 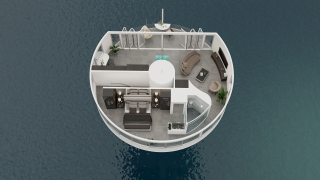 Take for example the company’s use of a bed presence sensor. When the owner wakes up in the morning and leaves the bed, the bed sensor will alert the coffee maker that it’s time to make the owner’s coffee. This sensor can also be configured for couples, so that the coffee maker is able to make two different types of coffee based on each person’s preference.

The same bed sensor can also be used to detect when the owner is getting ready for bed. It can automatically begin a bedtime routine: dimming or shutting off the lights, locking the doors, closing the blinds, starting some white noise or a special music playlist, etc.

This is just one of a wide range of fun personalizations that each home can have. Controlling this experience, will be the presence of an NFC chip that can be put into various devices: a ring, a bracelet, a necklace, etc.

“This, of course, could be really useful for the hospitality industry,” Romundt explains. “Imagine having properties all over the world and your loyalty members can set up their preferences on their first stay and have those preferences remembered whenever they visit one of your properties.”

But Ocean Builders isn’t interested in just creating living spaces that will amaze homeowners. It’s also interested in creating highly sustainable living spaces. In fact, every aspect of the pods has been created to benefit the surrounding environment. And the company has even found a way to create a natural habitat that attracts sea life and generates flourishing underwater systems.

“Any time you put something in the water that makes shade, you attract sea life,” Romundt says. “It starts with barnacles and soon other life will begin to grow on the underwater surface of the pods. This can lead to coral growth and eventually the creation of homes for fish and a thriving ecosystem.”

The company has also painstakingly obsessed over how it can use technology to prevent humans from polluting the environment in which the pods are floating.

For example, the team has been fixated on the bathroom experience – specifically the toilet experience. Since these pods aren’t hooked up to a sewer line, the Ocean Builders team had to figure out what to do with both solid and liquid waste. After doing quite a bit of research and invention, they eventually figured out a way to incinerate solid waste in such a way that only a tablespoon of non-toxic ash remains that needs to be disposed of regularly. But the heat generated by that incineration is not allowed to just escape; it is used to heat water for the home: shower, faucets and dishwasher. Meanwhile, liquid waste will be cleaned using a process called electrocoagulation and will come out clean enough to be drinkable. The cleaned liquid blackwater can be returned to the toilet tank and reused or it can be discarded. Greywater can be recycled and used for showering or used for the kitchen and bathroom sink. Alternatively it can be released into the water beneath the pod as it is cleaner than rainwater.

When it comes to the shower experience, the company is working to reduce shower water consumption by 90 percent, using a continuous and active three step water filtration process that will be available in Spring 2023. Plus, the company offers the option of installing a special shower head that creates micro fine streams of water which provides a higher pressure shower than normal while also reducing water consumption by 60 percent.

The company has also created each SeaPod to have a roof that is meant to collect rainwater so that it doesn’t need to create as much desalinated water. It can purify the rainwater and turn it into drinking water or use it throughout the house in other ways.

Coming to a Shore Near You

The company plans to launch its first SeaPod on September 22, 2022. Why that date specifically? Well, there’s a fun backstory to accompany it.

“The SeaPod looks a lot like the house the Jetsons lived in,” Romundt explains. “And the 60th anniversary of its airing is on September 22, 2022. Also, the Jetsons takes place in the year 2062 and George Jetson is 40 years old in the show, which means he was born in 2022. So, while we discovered all of this by accident – we’re working really hard to make our timeline so that we can have a lot of fun with this futuristic theme.”