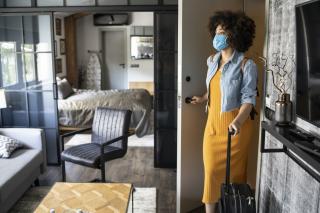 While most of us would pay good money to know exactly what the future holds, it remains as elusive as ever. And if the pandemic has taught us anything, it is that we cannot be certain of anything. For hoteliers, this is especially frustrating. But it doesn’t stop them from doing their best to make educated guesses. So, HT spoke with Raman (R.P. Rama) CHA Emeritus, CHTP, CHAE Past President of HFTP and President, CTO and CIO of Sarona Holdings, a hotel and technology investment company, to learn how his company has been coping with the pandemic and what technologies he thinks will be a part of the near future for the hospitality industry.

When asked what changes some hotels have implemented because of the COVID-19 virus, Rama spoke specifically of more touchless technologies as well as utilizing digital COVID-19 health questionnaires. Some countries have even implemented an app based tracking system of who around them may have recently been exposed without disclosing who it is so that the person can distance themselves.

“Guests want everything, from making the reservation to checking out, to happen on their own device,” Rama says. “They don’t want to meet with a front desk staff member if they don’t have to. But we also need to do our best to ensure they’re healthy prior to staying on property. That means guests need to fill out health questionnaires via their mobile device prior to their visit that information can be tracked, monitored and recorded per CDC guidelines.”

Speaking of contactless technologies, Rama believes that the “humble” QR code has been brought back to life in the United States because of the pandemic. He recently participated in a tech trial where he was able to assess the value of using QR codes within guest rooms. Not only is it a contactless technology, but it is secure as well. Plus, no app download is required for guests who have app fatigue.

“The QR technology I was demoing had many wonderful qualities, but I also saw some important areas where it could be improved upon. For instance, it needs to be able to offer management access on the backend so we can see how many of a certain type of request came in, who fulfilled the request and how quickly, etc. Plus, it needs to alert supervisors if a staff member assigned to the request has not yet completed it in an appropriate amount of time,” he explains.

While Rama is optimistic about QR technology, he is not as optimistic about robots in hotels. Robots come with their own unique problem sets, he explains. For instance, they are very expensive to lease and service. Second, a well-run hotel likely will have the robots sitting idle more often than not. Third, it’s unlikely that a hotel would be able to eliminate even one staff member position with a robot, meaning they become simply an additional expense.

“Maybe robots could work for select service hotels, especially at night when there is only one front desk attendant and one security staff member,” he muses. “A robot could fulfill a guest request and prevent the front desk from being left unattended at night. Or in some cases, robots could be useful for back-of-house operations such as delivering supplies to housekeepers when they are at their busiest, or perhaps they could be useful delivering food for room service requests and then returning to pick up the leftover food/trays.”

However, even in these “best case” scenarios, Rama feels that robots are just not quite as useful as humans might wish them to be.

When asked what hotel technologies might become a priority in 2021, Rama said he was curious to see if  “proof of vaccination” will become the norm for travel. This requirement is fairly common in other countries for other diseases. For instance, some countries in South America and Africa still require that travelers present a “yellow fever card” – stating the individual was recently vaccinated for yellow fever – before they can enter the country. If a COVID-19 vaccination card does become necessary, likely this will need to be tracked digitally in some manner and hotels will likely be required to view/record it as part of the check-in process.

Rama is also optimistic that 2021 and beyond could be the years when hotels become more sustainable due to the increasing cost of operations. For instance, energy conservation, hydrogen fuel, and solar power may become even more popular in 2021.

Additionally, Rama hopes that technology suppliers see the plight their hotel customers are living through adjust the way they charge for technology, that right now, isn’t being used. Charging a fixed cost per available room burdens the owners and model could be based on occupancy.

In 2020, hotels were charged for technology that was never used, Rama says. The current model for most tech suppliers is to charge an installation fee for their technology and then charge a monthly fixed usage fee based on the hotel’s total rooms available and not based on occupancy.

“There needs to be a new model where tech companies charge me based on actual occupancy instead,” he says. “If my hotel is running at 15% occupancy than the tech suppliers should be getting their money based on that 15% usage rate. If I make money, my tech suppliers should make money. But if my rooms are vacant, why should I pay you for technology that isn’t being used."