10/03/2013
Get great content like this right in your inbox.
Subscribe
Andrew Fields is Director of Giorgio Ristorante in Rosemere, Quebec. During peak hours, the restaurant fills 65 tables, from 11:00 in the morning until 12:00 at night. Fields’ business goal is the same as that of most restaurant owners -- maximize profitability by delivering excellent food and service, and he is always looking for new, innovative ways to achieve it. As often as not, that search leads him to what always ends up an elusive goal -- keep servers on the floor.

Keeping staff on the floor would mean they could each handle more tables without impacting the quality of their service. That translates into fewer servers each night. “Over the years,” Fields says, “there have been many nights and many many (many) tables I’ve handled myself, so I know why staff leaves the floor.” This list of reasons includes: to enter orders; to run orders; to return wrong orders; and to handle other roles during slow periods.

The problem was that all of these tasks were necessary. Orders have to be entered. They have to be run. Mistakes must be fixed. None of those could be eliminated. Or, at least, that’s what Fields thought.

The Move to Mobile POS
Giorgio Ristorante had been using Maitre’D POS for two years. Fields detailed his situation and asked what Maitre’D offers that could help to keep staff on the floor. A range of options were discussed (including Labor Management, HyperScheduler and CVM). Eventually the discussion turned to tablets running on Maitre’D’s Mobile Device POS solution.

The way Mobile Device POS works is simple. Servers carry a tablet with them when they take orders. The tablets run a uniquely designed version of Maitre’D—all the fea­tures are there, and laid out specifically for the small tab­let screens. Orders are entered directly into the tablet. Once the order for the table is completed—or even as each individual diner’s order is finished—the server touches the “Send” button and the order prints out in the kitchen.

Tablets virtually eliminate server trips to the fixed POS station to enter orders, which made the business decision easy to justify in this case. Most of the time, servers left the floor to enter orders at the POS, about 15% of their time. Eliminating those trips freed up almost ten minutes per hour—two tables per hour, per server.

“On paper, tablets sounded great,” says Fields. “But, I knew that the best of plans sometimes just don’t work. Giorgio Ristorante is a chain here in Quebec, but the decision was all mine, only for my restaurant. And I still had a lot of uncertainty about tablets.”

One of Andrew’s concerns was the fast-paced environment resulting in broken or destroyed tablets. There is no shortage of tablet offerings for the hospitality space. After careful review, Fields selected the Motorola ET1. It weighs the same as an iPad, but is built for the enterprise. This tablet can endure the abuse of a restaurant environment and comes with a three-year “no matter what you did to it” full warranty. POS Terminal 2000 enhanced that warranty with a same-day replacement guarantee. Since the implementation 6 months ago, no device has needed replacement.

“I was also worried about disrupting my business. I didn’t want some long installation process going on during peak hours, and I definitely didn’t want to have to shut down Maitre’D,” Fields says.

The installation was performed without a second of disruption. POS Terminal 2000 came into the restaurant when it opened in the morning. They got the Mobile POS module running, installed all the wireless equipment (access points, routers and so on) needed to communicate with Maitre’D, connected the tablets and verified they were working correctly. Well before the lunch crowd began to arrive, the restaurant staff was ready. The technicians at POS Terminal 2000 stayed through lunch to help answer any questions the staff had.

The tablet works just like every Android smartphone and tablet—the staff already knew how to pinch and swipe and touch. POS Terminal 2000 provided pre-launch training -- it didn’t take long to learn where everything was. However, and this was Andrew’s surprise, once the staff hit the floor, they were nervous—about making mistakes in front of the customer. It took a couple of days before the tablets became second nature to them. The owners are planning to roll out tablets in three other restaurants, and they’re going to add a little role playing to the training: letting each server handle a few “dummy” tables to build up their comfort level.

The Big Payoff(s)
After implementing the tablets, the staff was devoting at least 15% more time on the floor. This resulted in servers deliveri ng quality service to more tables, approximately two more per hour—sometimes more.

With each server able to handle more tables, payroll went down almost im­mediately. And it did not affect anyone’s income. In fact, servers achieved their weekly income goals earlier, so they needed less hours.

The average order increased by $2.00, and that increase is entirely on food items—add-ons, appetizers, deserts. That was a surprising benefit of having the servers on the floor longer. When customers want to order something and cannot find the server, they often lose interest before the waiter returns to the floor. When the server is on the floor, and the customer can make eye contact, that extra has a much better chance of finding its way on to the bill.

Another added bonus is that a bar code reader was installed for the tablets so staff could use them to take inventory. That level of accuracy has allowed the managing staff to save hours in administrative tasks.

“I planned for a six-to-eight month time to reach the breakeven point on the investment,” Fields reveals. “We’re going to get there sooner. And now the owners are going to put Mobile POS in their other restaurants.” 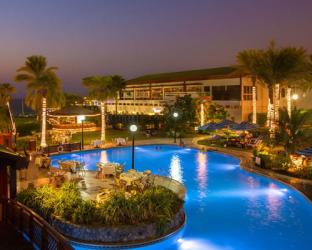