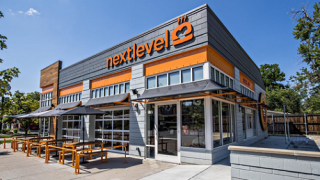 Next Level Burger plans to expand its vegan concept nationwide.

Next Level Burger, a 100% plant-based burger chain,  has raised $20 million in funding.

The capital infusion will fuel its national expansion plans, which consists of quadrupling its current store count nationwide by the end of 2025, and accelerate the brand’s long-term goal of opening 1,000 units.

“Since our founding in 2014, our company mission has been focused on a triple bottom line philosophy of doing good, having fun and making money,” said Matthew de Gruyter, CEO and Co-founder of Next Level Burger. “Now more than ever, the fight against climate change and for sustainability drives us and our awesome team of mission-oriented stakeholders.”

SUSTAINABILITY FOR THE PLANET

Sustainability matters to today's consumers and restaurant operators. Two out of three (66%) consumers surveyed feel it’s important that restaurants are open about their practices to limit food waste. According to the National Restaurant Association’s annual What’s Hot Culinary Forecast, sustainability will continue to influence menus and how restaurants make decisions in 2022 and beyond.

Restaurants are touting their efforts. Two Net-Zero KFC Locations opened in China. For Taco Bell, sustainability is on its list of "guiding philosophies."  Chipotle aims to reduce its carbon emissions 50% by 2030. Also leading the charge is Panera Bread, which has a goal to become climate positive by 2050.