True to its culture of giving, Jersey Mike’s franchise owners have been donating millions of sub sandwiches across the country during the COVID-19 pandemic. The company also recently gave 20% of sales to Feeding America, raising more than $2 million, which provides 20 million meals, in one weekend.

Jersey Mike’s had to cancel its annual Day of Giving on March 25 due to COVID-19. Jersey Mike's did continue to collect donations all month long and raised more than $1.2 million for local charities in March, an impressive number considering the mandated dining room closures and consumers' staying at home.

At the time of the first nationwide fundraiser in 2011, all of Jersey Mike’s 454 locations raised $600,000 for 66 charities. Last year’s Month of Giving raised a record amount of more than $7.3 million for local charities nationwide. To date, the company has raised more than $31 with the support of its local owners, crew members and customers.Today, Jersey Mike's operates more than 1,700 locations.

At MURTEC, during the session, Solving Today's Workforce Challenges with Technology, Ken Olenyik, Sr. Managing Director, Jersey Mike's Franchise Systems, shared how Jersey Mike’s franchisees choose a local charity to support.  The IT team, he explained, developed this capability where customers can roundup for charity, and also make a one, three and $5 donations. With online ordering, the popup appears as the customer is paying.  At the register, there is a prompt on the POS screen with the same message.

Originally just for the month of March, Jersey Mikes is rolling out this roundup for charity feature year-round, Oleynik said.

In other news, on May 20, Jersey Mike’s held the first Virtual Athletic Banquet to celebrate student-athletes missing their spring sports season. Jersey Mike's teamed up with high school sports marketer Huddle Inc. to offer motivational messages from elite athletes and some of the best coaches in America. The streamlined version is online. 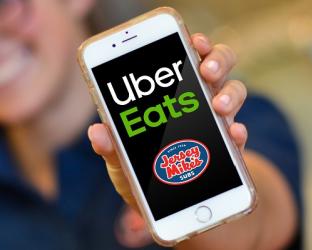