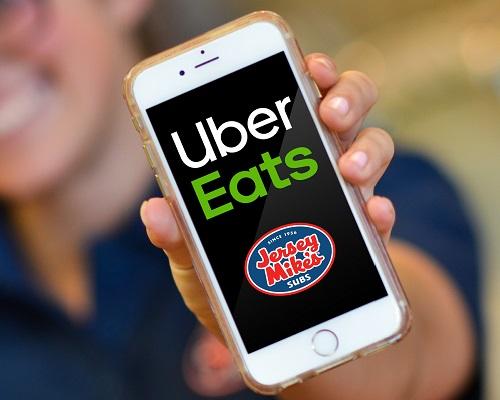 “Previously, an order would come in and it had to be entered manually into the POS, which was time-consuming and provided an opportunity for error,” said Scott Scherer, Chief Information Officer, Jersey Mike’s Franchise Systems Inc. “Once we learned Uber Eats could integrate with our POS, we jumped on it.”

Years ago, Jersey Mike’s built its own proprietary POS and tech stack, an uncommon practice in the restaurant industry, yet one that ensured a quick and easy integration with Uber Eats. The integration was completed within four weeks.

Jersey Mike’s went live in late October and, in two months, more than 1,225 restaurants have been integrated, with more to come. On average, each Uber Eats delivery is completed in less than 30 minutes.

“Through this integration, we were able to quickly double the number of stores on the platform,” said Ed Basch, director of business intelligence, Jersey Mike’s. “This makes it easier to onboard new stores — all they have to do is sign up and Jersey Mike’s tech team does the rest for them.”

In addition to the ability to quickly and seamlessly scale up, the POS integration ensures accurate sales and inventory reporting. It also improves consistency. The integration now allows for a standard menu across the brand. For instance, if Jersey Mike’s introduces a limited-time-only offer, this can be added to the POS and it will automatically show up on Uber Eats’ menus nationwide.

Jersey Mike’s has more than 1,500 locations open and under development nationwide.