Jack in the Box is making strides in rolling out its new drive-thru prototype.

During a February earnings call with analysts, the QSR said drive-thru updates were a top strategic priority.

Fast-forward to an August earnings call with analysts, CFO Lance Tucker said, ”We're making good progress” when asked about the drive-thru updates. The QSR has remodeled more than half of the 150 of the oldest units, including some that need structural work.

It’s still early days in the drive-thru remodels, but “We have seen good lifts on those of mid-to-high single digits sales lift,” Tucker explained. The QSR is still testing equipment, “so more to come on that once we've got some of the digital menu boards in place and are really doing some up-selling,” he added.

CEO Lenny Comma said the QSR is testing digital menu boards along with other components.

“And then also, as you start to have a relationship with those consumers into the future, you can evolve that platform to a place where you are communicating with consumers on a one-to-one basis based on their history of purchases with the brands,” he said.

“...It's really just a matter how we can capitalize on this from our individual brand. We're going to attempt to do so, but we're not going to work with it, if it doesn’t pay off.”

The San Diego-based restaurant company operates and franchises more than 2,220 Jack in the Box restaurants.

Photo by Christian Wiediger on Unsplash 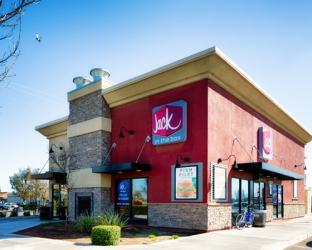 70% of its business comes through the drive-thru