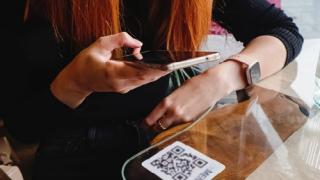 When it comes to smart technology, 70% of Americans expect it to be part of almost every hotel and restaurant soon.

According to HT's 2022 Restaurant Technology Study, 66% of restaurants provide QR codes at the table to access menus; 19% plan to add it this year.

But the question is, how do your customers feel about QR codes?  It might be time to ask.

We all know hospitality businesses embraced technology at warp speed during the pandemic, including QR codes. As someone who follows restaurant technology, I am a super fan of technology, including QR codes for viewing the menu and my personal favorite, to pay.  (And free Wi-Fi is a must-have.)  I try to use them every time I get, especially on Wednesday nights when my golf league, more than 50 members strong, descends upon a restaurant that has two of the hardest working servers in New England. I can’t imagine how much time I’ve saved myself, or the server, by paying by QR code.

And don’t get me started on dirty menus. It’s just downright gross to sit down to order a meal and open up a dirty menu.  Or worse yet, be handed a dirty paper menu. Almost three-fourths (74%) of restaurants surveyed offer an alternative for a paper/physical menu; 9% of restaurants were planning on adding this feature this year, according to HT's 2022 Restaurant Technology Study.  To which I say, “Godspeed!”

So, I am obviously biased and I respectfully disagree with this article from CNN Business about restaurants’ tech advancements during the pandemic:     “…None is as reviled as the QR-code menus.”

Eighty-eight (88) percent of respondents said they preferred paper menus to digital QR codes, according to the article citing research from Technomic.  And some restaurants have returned to traditional menus … at least for now.

Five Use Cases for Phygital Marketing in Hospitality

At the end of the day, not all QR codes and digital menus are created equal. I wholeheartedly agree with Bryan Solar, general manager of Square for Restaurants, who told CNN Business guests might embrace digital menus if they're more responsive and interactive, and can be used to order directly, add to their tabs, split their checks and pay for their meals.

If you're leveraging QR codes or in the process of adding them,  this article is worth a read.

Drop me a line and let me know what you think.

Send a Message
Anna Wolfe is Hospitality Technology’s senior editor.  She has more than 15 years of experience as a B2B journalist writing about restaurants, retail and specialty food. Read More
Advertisement