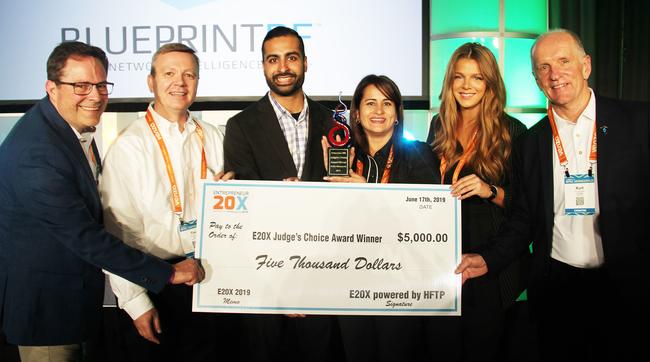 HITEC Booth #3017 - TraknProtect, a provider of real-time location technology purpose-built for the hospitality environment, has continued its winning streak, claiming an industry innovation award in this year's Entrepreneur 20X (E20X) competition at HITEC Minneapolis. Selected by an expert panel of judges comprised of hotel technology professionals, TraknProtect was honored with the Judges' Choice Award, which recognizes the most innovative hospitality technology startup solution each year.

The 2019 E20X competition took place on Monday, June 17, at HITEC Minneapolis, and featured presentations by eight competing startup companies. TraknProtect was ultimately selected following a presentation by Tim Hansen, the company's CTO, on the advanced suite of location-based services, which includes a comprehensive safety button alert platform, in addition to advanced inventory-tracking technology.

The prestigious E20X Award comes on the heels of TraknProtect also being named a finalist in the HTNG TechOvation Awards at HT-NEXT, which was held in New Orleans in April. It also follows a series of announcements by major municipalities, requiring hotels to provide safety alert devices for employees. This week, New Jersey became the first state to announce similar requirements.

The TraknProtect platform consists of a series of strategically placed hubs designed to interface directly with employee alert buttons and inventory tracking equipment. Using cloud-based technology, TraknProtect is able to triangulate the location of employees when a safety alert is activated and individual items of hotel inventory in real time. From there, the company's intuitive software is able to send immediate signals from active staff alert buttons based on their location or through user activation, which can then be received via desktop, SMS, email, or phone calls.

All of these functions are accessed using TraknProtect's simple dashboard, which can track real-time analytics on desktops, tablets, and mobile devices. The platform has been designed as a holistic way to provide security to the most vulnerable elements of a hotel's operations - its employees - and it does so by leveraging a property's existing Wi-Fi and devices, without any rewiring required. With no added infrastructure necessary, hotels can access the TraknProtect platform and provide immediate security to their employees.

For more information about TraknProtect's range of features, or to schedule a time to visit the TraknProtect team at HITEC Minneapolis, contact Parminder Batra at [email protected] or visitwww.traknprotect.com.