TGIF’s holders will receive a combination of cash and stock valued at $30 million and Allegro will assume approximately $350 million of net debt.  The valuation is based on a $10.16 stock price.

The majority owners of TGIF, funds managed by TriArtisan Capital Advisors LLC, expect to exchange a majority of their ownership in the TGIF business for shares of Allegro and significant holder MFP Partners, L.P.

This transaction is expected to allow the TGIF business to delever its balance sheet and provide it with the capital to fund future growth.

Fridays is an American casual dining bar and grill concept founded in 1965, with locations in over 55 countries, including 442 international franchised units and 396 domestic units (144 company owned and 252 franchised).

Within the past year, Fridays has made additions its management team, bringing in CEO Ray Blanchette, a 19-year Fridays veteran who previously led the successful turnaround and subsequent IPO of Ignite Restaurant Group.  Blanchette brought both John Neitzel and Jim Mazany back to Fridays to run franchising and company stores, respectively.

“The first order of business when I took over this company was to bring in the best talent to improve operations and innovation,” said Ray Blanchette, CEO of Fridays. “This transaction is the next significant strategic move, and will allow us to gain public company status and access incremental equity capital to accelerate the rejuvenation of this iconic global brand,” said Blanchette.

More information about the merger can be found  at the Securities and Exchange Commission’s site. 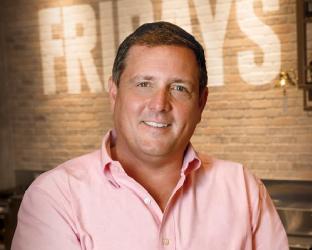 Industry vet was most recently CEO of Ruby Tuesday

Custom Facebook application enables guests, 21 and over, to buy up to five beers by "liking" the Friday's fan page and placing an order through the custom tab.