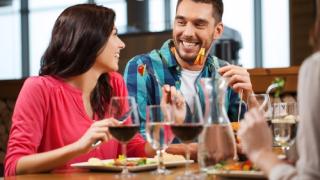 Research released by TouchBistro finds that despite the pandemic causing a boom in takeout and delivery, diners in the U.S. and Canada still prefer the experience of dining in – especially at local restaurants.

According to the survey research conducted by Maru Matchbox on behalf of TouchBistro of more than 2,600 diners from across the U.S. and Canada, the quality of food tops everything when dining in. Two-thirds (68%) rank the quality of food as the most important factor when deciding where to dine, followed by location (66%), customer service (64%), price (62%), and safety/hygiene (61%). Diners rank dietary-specific menus (19%), live music/DJs (11%), and QR code menus (10%) as the least important factors influencing their dining decisions.

When deciding on restaurants, the ability to preview menus and nutritional information influences the restaurant decision for 74% of diners, according to HT's 2022 Customer Engagement Technology Study

“Our research shows that the pandemic hasn’t permanently changed habits among diners and that’s good news for today’s restaurateurs. While innovations have made it easier to order takeout, it’s clear that convenience hasn’t replaced the desire to dine in,” says Samir Zabaneh, CEO of TouchBistro. “Restaurants need to return to the key actions they know worked before the pandemic and that their customers loved, as these go a long way in building customers for life.”

The research finds that diners follow their cravings when deciding where to eat. The majority (72%) choose where they want to dine based on what kind of food they want to eat. In fact, for three-quarters of Millennials, Gen Xers, and Boomers, the type of food a restaurant offers is their number one deciding factor.

When deciding on where to dine, the availability of free Wi-Fi influences 64% of diners, according to HT's 2022 Customer Engagement Technology Study

What keeps diners away

The study finds that a bad reputation is much more likely to turn diners off than high prices. Though the majority of diners are no longer concerned with pandemic-related safety protocols, health and hygiene is still very much on diners’ minds. 73% say a recent health inspection warning would deter them from visiting a restaurant, making it the number one reason customers avoid certain venues.

Loyalty programs aren’t the only way that diners engage with their favorite restaurants. 50% of diners report that email is their preferred way to stay in touch with restaurants. And while email is the most preferred form of communication across generations, 20% of Gen Z diners in the U.S. and 13% in Canada prefer to hear from restaurants via social media.

As diners return to dining-in, other trends are just beginning to take shape. A closer look at the findings from the study reveals hidden trends that will be pivotal in the years ahead.

Moderate Menu Price Sensitivity: Inflation has skyrocketed, making consumers increasingly sensitive to price increases in all aspects of their lives, including dining in. For some diners, this means menu price hikes could be a major deterrent, with around one-in-five diners (22%) saying that a price increase would significantly impact their decision to visit a restaurant. However, it’s also clear that consumers love restaurants and are willing to make room in their budget for dining in. Nearly half of diners – 45% of Americans and 47% of Canadians – say that menu price increases would only somewhat impact their decision to visit a restaurant, suggesting that diners are willing to absorb some menu price increases to enjoy the food they love.

Hidden Potential of Loyalty Programs: While joining a restaurant loyalty program is not yet the norm for the majority of diners, a closer look at the data reveals that these programs may be poised for a major surge in popularity. Younger diners and diners who order takeout/delivery are embracing loyalty programs with open arms. In fact, a whopping 40% of Gen Z and 41% of Millennials diners in the U.S. are already members of a restaurant rewards program, suggesting that younger diners are much more likely to join these programs and expect them to be a part of their everyday dining experience. And among diners who order takeout weekly or more, more than half of American (58%) and Canadian (56%) diners engage with loyalty programs at least once a week.

Demand for Online Ordering Innovations: While dining in is the preferred way to visit restaurants, this does not mean that takeout and delivery are no longer a vital sales channel for restaurants. On the contrary, 29% of Americans and 25% of Canadians say they still order takeout and delivery at least once a week or more often, which represents a huge piece of the pie for restaurant sales. Convenience is still the main driver behind off-premise orders, while the biggest deterrent is high delivery fees.

Online Influencers and Their Growing Influence: A closer look at Gen Z’s dining habits suggests that social media and online influencers may increasingly play a role in restaurant decisions. 28% of Gen Z said that social media influences where they decide to dine and a whopping 39% of Gen Z diners say that they have tried a new restaurant based solely on the recommendation of an online influencer. Instagram appears to be the most influential platform for this generation, but TikTok is on the rise. In the U.S. one-in-five (21%) Gen Z diners turn to TikTok before dining out.

Complete Report Available
The “2022 Diner Trends Report” can be downloaded for free at https://www.touchbistro.com/blog/diner-trends-report/