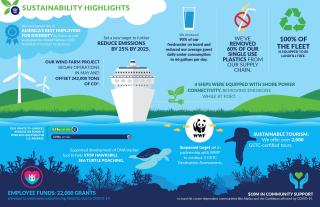 In a recent press release, Royal Caribbean Group announced its new commitment to the next phase of its ongoing partnership with World Wildlife Fund (WWF) for guidance and counsel in establishing bold environmental goals and sustainable business practices.

“Healthy, sustainable oceans are paramount to our mission of delivering the best vacations responsibly,” said Royal Caribbean Group CEO Jason Liberty. “Our partnership with WWF encapsulates our belief in continuous improvement and our commitment to advancing our environmental, social and governance (ESG) work. The support and assistance of WWF will be invaluable to realizing this mission as we work to set and achieve our sustainability goals.”

Royal Caribbean Group first partnered with WWF in 2016. Since then, WWF has advised Royal Caribbean Group to embed sustainability into the core of the company’s business and across the industry, promote responsible tourism in priority coastal destinations and help protect the oceans by investing in conservation programs globally. This included establishing bold 2020 sustainability goals that the company has met or exceeded, with the exception of the sustainable seafood sourcing target, which was impacted by global suspension of service from the pandemic.

Some of Royal Caribbean's original emissions reductions goals set in 2016 with WWF were met with the help of technologies like:

Since the partnership began in 2016, Royal Caribbean Group and their funding have helped to advance WWF’s ocean conservation priorities around the world— meaningfully furthering WWF’s efforts to protect critical ocean ecosystems, and highlighting RCG’s commitment to safeguarding ocean health.

Many of these conservation efforts have included the use of technology like:

The next five years of the partnership will focus on setting ambitious, measurable sustainability targets around the reduction of carbon emissions, the sustainable growth and development of the business, sustainable commodity sourcing and tourism, the elimination of single-use plastics and waste management, among other areas.