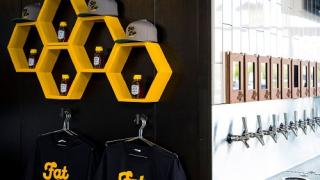 Originally operating out of a food truck, the pizza concept’s self-pour tap wall offers a rotating selection of draft beverages, mostly from local breweries and wineries. Patrons can explore details for each option on touchscreens above the taps and pour as much or as little as they please. RFID-enabled wristbands are used to activate the system and track the ounces.

Owners and husband-and-wife team, Chris and Veronica Laramie started the food truck after 25 years in the restaurant industry. Their unique take on pizza—a cross between New York thin crust and Neopolitan style pies—gained popularity at breweries and wineries around Temecula. After just one year, they came across a location in Corona that was already built out for a pizza concept and included an iPourIt system.

“Every food truck has the goal to become a brick and mortar but we hadn’t considered the beer aspect until we found the location. We upgraded the self-pour tech to the latest platform and now we’re not only pulling in customers with the pizza, but also the beer selection,” said Chris Laramie.

The self-pour tap wall eliminates the need to build out a traditional bar, creating more space for seating. There’s also no need to staff a trained bartender for alcohol service and cashiers can easily learn the system and give quick tutorials to new guests. iPourIt offers an integration with the Untappd platform and updates the beer menu automatically so app users can see exactly what’s on tap at any time.

“We guide customers through the process the first time and after that, it’s a no-brainer. It’s a ‘choose your own adventure’ experience. They can pour as much or as little as they want and sample through the things they haven’t seen before,” said Chris Laramie. “They’re loving it—lots of people have never seen it before and think it’s like space age craziness.”

The concept is modeled after the traditional East Coast slice shop with an intentionally simple menu. Their signature pizza is the Hot Honey Pie with pepperoni, black olives, red onions, and a house-made habanero hot honey.