Market Force found 58% of polled consumers have been provided with a restaurant tablet while dining, a 21% increase over last year, and 87% reported that they have used one. The most popular activities on tablets were paying the bill (72%) and viewing the menu (52%). However, the number of users significantly drops for categories such as reordering drinks or additional menu items (27%), take a survey (26%) or use/sign up for a loyalty program (22%).

Market Force found that restaurant mobile app adoption is growing, with 45% of diners indicating they’ve downloaded a restaurant app, up 4% from 2016. However, among 25-44 year olds, that percentage increases to 51%.

The apps are mainly used to view menus (64%), find discounts (50%) and find locations (41%). Yelp is still the most downloaded restaurant app (53%), followed by TripAdvisor (32%) and OpenTable (25%). Specific restaurant branded apps cam in at only 7% which is still higher than GrubHub and UberEats which came in at 1%.

While Yelp might be the most popular restaurant app downloaded, it does not rank highest in user satisfaction. Only 29% of respondents were satisfied with Yelp. However, restaurant specific apps scored the highest in guest satisfaction at 40%, beating both OpenTable and TripAdvisor.

Yelp has also replaced TripAdvisor as the app that wields the strongest influence over diners’ choices. Forty-two percent said that Yelp ratings impact their restaurant choices, and just 40% said the same about TripAdvisor. Only 21% said the same about a specific restaurant branded app. Also, diners indicated that they’re more likely to leave a positive review on TripAdvisor than on other apps. On Yelp, they are as likely to leave a negative review as they are to leave a positive review.

The survey was conducted online in October 2017 across the United States. The pool of 7,926 respondents represented a cross-section of the four U.S. census regions, and reflected a broad spectrum of income levels, with 51% reporting household incomes of more than $50,000 a year. Respondents’ ages ranged from 18 to over 65. Approximately 73% were female and 27% were male.

Methodology
For each category, study participants were asked to select which casual dining restaurant they visited most recently from a list of restaurants with at least 100 U.S. locations. Only those restaurant brands that were selected by at least 2% of participants in each category were ranked and analyzed. 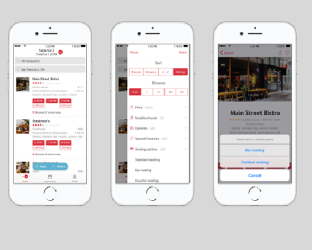