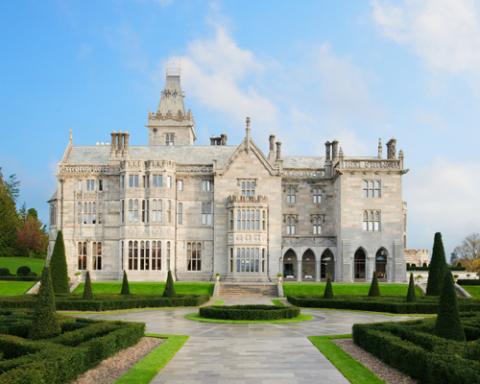 On the banks of the trout-rich River Maigue in the rural idyll of County Limerick, Ireland sits Adare Manor — an early 19th-century neo-Gothic mansion set within an 840-acre parkland estate. The estate was originally converted into a hotel and golf course in 1987 by Irish-American businessman Thomas Kane, but during the last three years it has undergone a transformation into a luxury resort.

JP McManus, billionaire businessman and a successful Irish racehorse owner, bought the property in 2015 after hosting several pro-am golf tournaments on the estate. He had the vision of transforming it into something extraordinary. Adare Manor now features 104 guest rooms and suites, a world-class golf course and clubhouse, spa, ballrooms, bars, restaurants, and cinema, and has even been the setting for balls, banquets, concerts, and TV talent show The X Factor.

Due to its historic significance, the manor could not be structurally altered, but the interior was completely refurbished while an entire new wing was added to more than double the number of guest rooms as well as housing the new suites, ballrooms, and cinema. McManus wanted to recreate the luxurious feel of the original Manor House while simultaneously including all the high-tech features that the high-profile guests expect. So, he enlisted his technology specialist Velocity to ensure Adare Manor was state of the art.

Striking the right balance between functionality and ease of operation can be tricky for hotels. To find that balance, the hotel and technology vendors must understand their client base and design a solution suitable for the typical range of guests. The kind of technology a technology vendor would put into an ultra-modern city hotel with a clientele of predominantly under-30 young professionals, for example, versus a historical rural retreat like Adare Manor, are very different.

The technology had to be highly functional, but at the same time completely unobtrusive and extremely easy to use. When people install smart technology in their own homes, they can specify precisely what they want and have the time to familiarize themselves with all it can do and how to control it. But if people come to a hotel, they need to be able to use it instantly and intuitively. Adare Manor realized that the key was to give guests various ways to control the smart features. 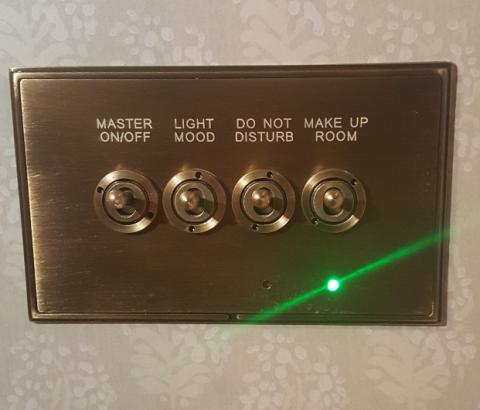 Velocity put a simple rocker switch on the walls with a button to cycle through four or five different lighting scenes based on the time of day or year, all pre-programmed by professional lighting designers. Since everybody knows how to use a switch, the technology is easy and intuitive, and the guest doesn’t see any of the Control4 technology that powers all the smart features—it just becomes part of the experience. In the same way, guests can also shut the curtains automatically using a bedside switch or press a button for “do not disturb,” which disables the room’s doorbell, informs reception not to enter, and lights a red LED outside the room.

Guests can also control room features via an easy-to-use app, specially created by Velocity, on a tablet placed in their room. Those not familiar with touch screens and apps can access the features via the room’s smart, networked TV (IPTV) or the remote control the same way they would flip the channels.

A Control4 Pakedge network ensures robust WiFi coverage across the estate, while allowing guests to stream content from their own mobile devices wirelessly to the IPTV in their room, or, indeed, vice-versa—stream what’s showing on IPTV to their mobile device to watch while having a drink on the terrace or a stroll around the gardens. Alternatively, they might prefer to book the cinema, where an individual touch screen gives them full control of the theatre, so they can watch a movie of their choice, live horse racing, or a golf championship.

Technology doesn’t stop at the guestrooms; the Control4 system helps the staff to be more productive and attentive to the needs of guests by automating all the lighting and music across the hotel and golf club. For instance, as the sun begins to set, the lights automatically transition discreetly to an evening scene over the course of a half-hour. Each area has been programmed slightly differently to give just the right ambience at the right time, based on input from professional lighting designers. Plus, the automation also aids hotel management, to allow hotel managers to see usage data on all the rooms and control them remotely—heating, lighting, and so on.