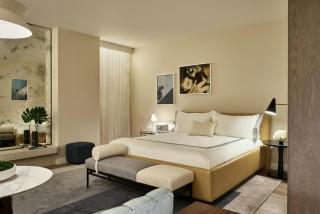 During Hyatt's Q2 2021 earnings call, CEO Mark S. Hoplamazian was pleased to announce that system wide RevPAR grew 58% in Q2 2021 compared to Q1 2021. Driven primarily by leisure demand, systemwide RevPAR was trending at approximately 50% of 2019 levels prior to Memorial Day weekend and has grown to nearly 75% of 2019 levels during the month of July with RevPAR ending at approximately $100.

“The RevPAR acceleration has come through higher demand but also bolstered by a significant increase in the rates, which are nearing fully recovered levels,” Hoplamazian said. “Overall, swiftness of improvement in recovery is impressive considering major travel restrictions remain throughout the world, business chains and group have only partially recovered and international travel remains limited.”

Hoplamazian noted that RevPAR growth in the United States was the primary driver of the jump in systemwide RevPAR improving 75% in the second quarter over the first quarter and more than double a 30% aggregate growth rate for the remainder of the world.

“The United States benefited from widespread vaccine availability and reduced travel restrictions, which unleashed significant pent-up leisure demand,” he explained. “From a global geographic market perspective, the rate of recovery continues to be highly uneven and heavily dependent on successful vaccination rollouts, leading to lower transmission rates COVID-19 and ultimately the easing of travel restrictions.”

For example, as of mid-July, geographic areas such as Europe, Southeast Asia and the Middle East are trending at less than 50% of fully recovered RevPAR levels, while the United States, Mainland China and the Caribbean are more than 80% recovered.

“The surge in our resorts is unlike anything we've previously experienced,” Hoplamazian added. “In January, comparable U.S. resort RevPAR was down 75% versus 2019. In June, just five months later, RevPAR was 11% above 2019 with strong average rate growth in June of more than 25% compared to 2019 levels. The leisure transient surge has extended well-beyond our domestic resorts. Hotels in Mexico and certain parts of the Caribbean are also at higher RevPAR levels in June relative to the same period in 2019.”

Business Transient and Group Trending Up

Hyatt remains encouraged by steady improvement in its business transient and group bookings. Business transient RevPAR in June nearly doubled from Q1 2021 with RevPAR performance trending at 60% of 2019 levels at the end of June compared to 40% two months prior.

Business transient is at approximately 40% recovered globally and demand varies significantly by market, said Hoplamazian. For example, in the United States, dense urban markets such as New York, Washington D.C., Chicago and San Francisco are at only 20% to 30% recovered, while the majority of other urban markets are trending at a 50% recovery level or higher.

“Regional businesses and some of our smaller corporate accounts are recovering the quickest, but we're also seeing acceleration in our comp accounts and continue to expect a more robust recovery in the fall,” he added.

Hyatt also reported that more groups – both large and small -- have been returning to its hotels and ballrooms with the brand seeing room block actualize above expectations and the general size and mix of groups returning to normalized levels.

“Group revenue booked in June for events that will occur in 2021 has reached approximately 90% of 2019 levels in our Americas full service managed properties with the rate of cancellation diminishing to only a fraction of the levels we experienced just a couple of months ago,” Hoplamazian said. “As we look to 2022, while group is down in the mid-teens compared to 2019, our leads are tracking 30% higher, which suggests that our pace deficit should improve. Additionally, we're pleased to see group business booked in the second quarter for 2022 at an average rate that is 5% higher than the same period in 2019.”