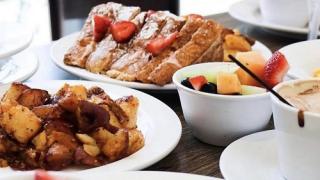 Sebazco was previously VP of Operations and Development at MOOYAH Burgers, Fries & Shakes for the past five years.  Known for its scratch kitchen, Famous Toastery has 26 locations, both company-owned and franchises. HT caught up with Sebazco to talk about new prototypes, tech and its role in fueling the next round of growth at the Charlotte, N.C.-based brand. Plus what industry trend Sebazo says is a “bit of a shell game.” Read on!

HT:   Take me through what's going on at Famous Toastery and how you're reducing costs.

Sebazo:  We're reviewing everything from soup to nuts.  It's a 16-year-old brand that just kind of evolved, based on guest experience. [Our] prototypes weren't built for a lot of carryout business or third-party delivery use. And the pandemic taught us that it can't be hard for the guests to buy from you. We're reviewing that and we're looking at upgrades to our POS platform.

We are currently in the middle of a complete prototype redesign. We don't want to make anybody obsolete, so we're looking at how to retrofit that into existing locations, whether they're company-owned or franchise.

HT: Retrofitting is an interesting challenge sometimes.
Sebazo: Yes and no. You can't make anybody obsolete, if a franchisee has a 10-year lease.

HT: True! You said you're looking at upgrading your POS. In  general, what kind of features are important to you?
Sebazo: Primarily what we're interested in is stable architecture. We can't have a system that's going to crash on us. We've experienced that over the last couple of years, multiple times, [and it’s always] when you're busy that the thing goes down.  It never goes down Monday at two… We're researching  all options at this point in time. And then the capabilities of the system, in addition to being a stable platform, it has to deliver all revenue streams with some stability. So whether that's online ordering or pickup.  A next step for us is to get an app that interfaces with the POS system, just to make it easier for the guests to buy from us. We're … looking at where we currently are, what we want it to do, and then what's feasible for us to do in, in the next iteration.

HT: You talked about redesigning the prototype and retrofitting, especially for franchisees and company stores that have those long leases, and making it easier for customers to buy from you. Are  you looking at adding pickup windows, carryout shelves, a drive-thru? What's important to you in a redesign?
Sebazco: For Famous Toastery, the best experience you'll ever have at one is with us,  but it doesn't mean it has to be incredibly laborious to get a to-go order or for a third-party delivery driver.  I've been in this business 37 years and it's been a front-of-the-house, back-of-the-house mentality. Now there's a third place happening in our restaurants. Some people call it the middle of the house, but it's that place where someone has to be responsible to get to-go food out the door.  Those that are doing it well have built it into not just their prototype, but their service model. It's got to be accurate. It's got to be as close as possible to the dine-in experience. So that becomes a packaging and a validation step. Frankly, we've had to go back to school on that a little bit.

HT: So when it comes to carry out and online ordering, is there a dedicated menu? Are there some things that you won't do for carry out,  for example, eggs benedict?

Sebazco:  No. You don't want to say no. We're not a brand that's built on that.  Philosophically the answer is ‘Yes, what's the question?’  Fundamentally you cannot cut your way to prosperity.

So rather than serve a bunch of egg benedicts on a catering channel, we need to make it more compelling to buy items that we're good at, that travel really well. So, rather than try and cut things out of the menu, we want to make other channels more compelling.

HT: I wanted to talk to you a little bit about food waste and sustainability. Supply chain issues continue to persist. As you know, some ingredients are hard to get, such as eggs. How are you using technology to help manage your supply chain and to adapt to these uncertain times?

Sebazo:  So right now we're stickhandling the very first actual versus theoretical food cost program we've ever had in the 17 years we've been a brand. We've just kind of said, here's where we feel like it should be, and held operators accountable to a budget on the company-side. With the volatility over the last five years of what's going on in food prices, that's really not a fair way to apply incentives or to really look at the business. We are kicking around, but we're not quite yet ready for dynamic pricing. That feels like a bit of a shell game.

If the guests aren't ready for that, aren't gonna react to that, we're not going to get to dynamic pricing this year. A brand is about consistency and we've got to A) deliver to the guests, first of all, then figure out how to do it profitably. Eggs have gone up three-and-a-half times in 60 days and it's a 350% increase. I cannot pass that on to the guest. We just took our first price increase in August that we've taken in years. A  natural versus theoretical program will be meaningful to us so that we can react on a pricing front. It likely won't be a dynamic pricing [solution]. So we will be in a position to better react when these types of things happen. We can weather 30 or 60 days or a quarter of some volatility… If we're 60 days out and it continues to go up [we have to consider adjusting our prices]. But to make a few bucks for a quarter at the expense of alienating a guest [when] we've spent our entire lifetime trying to protect that relationship; we are just not going to do that.  At the very minimum we have to know where we are, that’s why we're stickhandling actual versus theoretical and why we're looking for the right enterprise solution.