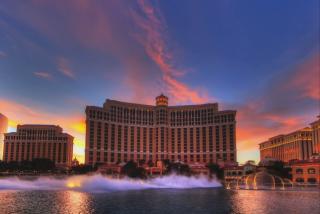 "At MGM Resorts International, conservation is in our DNA," says Chris Magee, vice president of sustainable facilities. "I've been with the company for more than 25 years and it has been instilled in us from the very beginning that sustainability and corporate social responsibility is important."

While resource conservation has always been a priority for the company, it was more than 12 years ago that MGM implemented its Corporate Sustainability Division to help monitor and reduce electricity, natural gas and water consumption. While it was "easier, but never easy" to improve its usage of electricity and natural gas, water proved more difficult, Magee noted.

Initially, the company set construction standards, installed smart irrigation systems, desert landscaping, and low-flow sinks, shower heads and toilets at its properties to help support its water conservation efforts, but it was constantly searching for ways to better monitor water usage at its pools, spas, commercial kitchens, and cooling towers. To help it do this, MGM partnered with WaterStart, a non-profit association based in Nevada that connects companies like MGM with technology startups that specifically deal with water conservation.

While everyone wants to conserve water and be responsible, identifying true ROI for implementing water conservation technology is difficult because "water is cheap," says Nathan Allen, executive director, WaterStart. "When you're only looking at the volume of water consumed and how much you can save on your water bill at the meter, ROI is difficult for installing these more expensive water conservation technologies."

One company doing some exciting work with smart water technology is Apana. It works to help companies protect themselves from the devastating impacts of water waste caused by failing equipment, hidden leaks and inefficient, operational practices. Apana maintains that although the cost of water and sewer can be inexpensive, the resulting impacts to property and business operations in addition to overall water loss can be very expensive.  In 2014, when Magee met Apana co-founder Frank Burns for the first time, Apana had not yet perfected the technology for a complicated resort customer like MGM, but a few years later, and after WaterStart reintroduced Apana to MGM, both companies were ready to partner and trial this new technology.

After various meetings, MGM and Apana identified four specific areas where they were most interested in applying the technology to monitor and measure water use at the Bellagio property: cooling towers, the front feature, pools/spas, and hot water applications. The Apana team then worked with Bellagio's engineering team to install the sensors.

According to Magee, Apana installed twelve sensors total and did its best to prevent the Bellagio from having to cut pipes. While it wasn't avoidable in all instances, several deployment points were outfitted with clamp-on IoT enabled sensors. These ultrasonic meters are mounted to the outside of water pipes and are calibrated specifically to account for the pipe's material and thickness when sending flow data back to the Apana system.

As its sensors collect the high resolution flow data, Apana's communication protocol – APANA LiNK – uses low power, wide area technology to collect the data from all areas of the resort and sends it to the cloud where it is analyzed. Traditionally, the data is segmented in 60 second increments, however, Apana has the ability to look at the data in second-by-second increments as well. Currently, the smart water management system is monitoring and analyzing 1440 data points per day from each of the installed sensors.

This information essentially yields the water fingerprint, unique to each area of the Bellagio. It also allows the company to see real-time waste events when they happen and even triangulate where they are occurring in the water infrastructure. This provides companies such as MGM with a huge advantage as they're able to discern what is happening in real-time, allowing staff to address physical failures or process drift when it occurs rather than 30-60 days after the event occurred when the water bill arrives.

At one point, after installing Apana's sensors, MGM noted a big movement in water flow at its pools. It was discovered that the spike in water use was part of the pool backwash cycle, a common and necessary part of pool maintenance. While MGM was aware that this was happening at its pools, this was the first time it could quantify how many gallons of water were being used for this maintenance task.

"Backwashing might be necessary but now we can work to improve the way we do it," Magee noted. "Maybe we can cut the number of gallons used by 10%, 20% or even 50% in the future and validate it."

Other use cases include pinpointing mechanical failures such as relief valves on hot water heaters, TLC valves on water softeners and the critical functions of the make-up and blown down valves on cooling towers. When this type of equipment begins to fail, it's often hidden and undetectable without real-time data. Early detection could prevent this from becoming a catastrophic event. Additionally, operational drift is another way the company can use its sensor data to manage specific processes and process times to see how water is being used among different workforce shifts.

According to Magee, the Bellagio could – in the future – install dozens if not hundreds of sensors around the property. One potential benefit could be realized by installing a sensor at every water pipe entering a public bathroom, which would let the company see which restrooms are used the most. This data could then be used to help its facilities team improve its routine preventative maintenance program adding a higher element of predictive maintenance.

As a company dedicated to sustainability, MGM realizes the risks associated with mismanaged water. Clean drinking water is a valuable and limited resource, and many cities around the world are at risk of facing less than average supply, Allen notes. Cape Town, South Africa made headlines last year when it announced it was nine months shy of day zero: when there would be no more water in the reservoir the city used for inhabitants. According to Allen, tourism fell by 60% because "no one wanted to go on vacation there and risk not having water."

Supply isn't the only issue. Water quality is too. Imagine if Chicago had to issue a boil water order throughout the city, Allen adds. No one could use the water to brush their teeth or to bathe. How would hotels cope? "The hospitality industry needs to really be considering what potential issues could affect them – whether it’ water supply, quality, or reliability. These are important issues to discuss with city officials and water utilities.

Send a Message
Michal Christine Escobar is Hospitality Technology’s Senior Editor, with a concentration on the hotel industry.  She has more than five years of experience as a B2B journalist. Read More
Advertisement