Hoots Wings signed an 18-unit area development agreement bringing locations to Southern California over the next five years. Owned and operated by HOA Brands, parent company to Hooters, the fast-casual wing concept now has 105-plus franchise agreements signed year-to-date, with over 10 locations in various stages of development, and eight open locations as it continues to attract single and multi-unit franchise operators nationwide.

At MURTEC, Marc Butler, SVP, Strategic Planning/Off Premise, HOA Brands, shared recent tech initiatives that have made a difference at Hooters, at its fast-casual concept Hoots Wings and its virtual brands.

MURTEC is available on demand. Check out the MURTEC Content Hub.

On the West Coast, the first two locations are slated to open in Q1 2022. Behind this agreement is seasoned restaurant entrepreneur Reza Medali. With nearly 30 years in the franchise industry, Medali was seeking opportunities to grow his QSR portfolio with a stand-out chicken concept. Hoots now joins Medali’s robust portfolio that includes 15 Blaze Pizza franchises throughout Southern California and two Subway locations.

“Hoots has established itself as a leader in the QSR wing space – with Hooters backing a 35-plus year history, the decision to invest was a no brainer,” said Medali. “When seeking a stand-out chicken concept to add to my growing portfolio, I was immediately attracted to the nostalgia engrained in the hoots wings brand. With experience in restaurant franchising, I knew I needed to feel that passion and support from the team and also believe in the product. The quality of hoots wings is far more superior than any player in the space – and I’m confident I’ve invested with the best.” 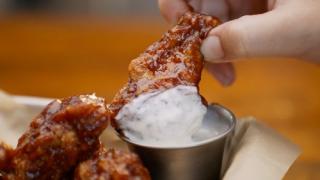