09/11/2014
Get great content like this right in your inbox.
Subscribe
The Habit Burger Grill is an Orange County, California-based family burger eatery specializing in chargrilled burgers, sandwiches and sides with locations throughout California, Arizona and Utah. Aside from its quality fresh food, The Habit has built a sterling reputation for excellent customer service and continuously strives for ways to improve their service level through new methods and technology – always with the customer in mind.

A Takeout Business Opportunity
The growth of “off-premise” (phone, online and mobile) takeout business within the industry is forecasted to continue its rapid growth in the double digits for many years to come. However, the most common problem restaurant chains face is the relative inability to equally serve call-in, online and mobile takeout customers to the same level as the restaurant’s in-store customers.

The Habit realized they could vastly improve the service levels provided to their takeout customers, while also alleviating some operational pressures they experienced during peak hours. With in-store business for The Habit booming and new locations being added throughout the country at a rapid rate, developing a strategy to improve its takeout business had become a top priority. The Habit team realized that along with improving the volume of takeout orders and the takeout customer experience, they also would be extending their brand and image within the industry; thus attaining incremental revenues and profits and developing more frequent and loyal customers.

The Habit’s takeout business faced the following three pronged challenge: 1) their takeout business experienced only minimal growth and remained a micro-fraction of its overall business (less than 1.0%), 2) by operationally focusing a majority of attention on their dine-in customers during peak lunch and dinner dining hours, it resulted in leaving a lot of money on the table as well as relative potential for their takeout business, and 3) with the proper strategy and partner in place, they could continue to improve the overall customer service image of its brand.

The dilemma was how to properly triage and serve call-in, online and mobile takeout orders at the same high-level of service throughout all operational hours as the in-store customer orders without sacrificing or cannibalizing from the well-established in-store service and order level?

To solve this problem, The Habit initiated a search to enlist a third party order management system including call center, mobile and online ordering platforms to fully integrate with their point of sale system - complementing their high standard customer service levels.

It was evident to The Habit that while there were numerous vendors providing online and mobile offerings, there were few  vendors who had a fully integrated, end-to-end solution which supports all of their off-premise takeout business requirements. Whether the ordering mechanism used by the customer is the phone, online or mobile device, all off-premise takeout transactions were sought to be integrated and supported by one system, one database, and one partner.

Upon concluding its search and proposal review process, The Habit entered into a strategic partnership alliance with Restaurant Revolution Technologies (RRT).  “RRT’s complete integration and innovative technology were so attractive from the beginning that it became a very easy decision during our partner search,” said Mike Repetti, Vice President of Information Technology of The Habit Burger Grill.

The Habit’s first installation and rollout of RRT’s call center, technology and services came in early 2013 beginning with a pilot program involving all four Arizona locations. The results out of the gate were astounding. In the previous year prior to working with RRT, the same four locations averaged less than 10 takeout orders per week, per location. By the end of its 60 day pilot program, those same locations were averaging 30 takeout orders per week, per location via the call center alone. Currently, these same four locations are now realizing an average of 60 plus total off-premise orders per week; a dramatic increase over where they were previously.

“It was simply an overwhelming success with our first pilot locations,” said Mike Mirkil, Vice President of Marketing of The Habit Burger Grill. “We didn't need any additional training for our employees, and could immediately see the ROI from the increase in our overall weekly order volume.”

Quantitative ROI: Over 200% Increase in Takeout Order Revenue
In the case of The Habit, RRT’s call center, online and mobile platforms captured takeout orders that were simply not processed or were lost through service challenges and other previously existing issues, specifically during peak hours. In the year preceding the working relationship with RRT, The Habit’s takeout business constituted only a micro-fraction of their overall business revenue mix - less than 1%. By the 2nd quarter of 2014 following their company-wide installation with RRT, The Habit’s takeout business increased to above 3% of its overall revenue mix in less than a year – an increase of over 200%. The Habit’s new ability to capture takeout orders substantially impacted their order and revenue streams without the need for additional in-store labor by offloading thousands of phone calls per month which previously needed to be handled by the staff at each respective location.

The Habit’s revenue boosts resulting from the capturing of new orders, however, was only part of the story. While digging deeper into the initial results, differences in The Habit’s average order size, depending if the order was placed through a phone call vs. an online or mobile order, interestingly began to deviate. Initial results showed that the highest average order is handled over the phone. Phone orders yielded substantially larger top dollar orders - top dollar order for phone approximately $400 vs. $50 online and mobile. As such, The Habit average order results via RRT’s services resulted in the following: top 20 order average shows call-in orders 5 times higher than online and mobile and the highest call-in order is 7 times higher than highest online or mobile order.

Furthermore, the speed created by RRT’s advanced order management technology greatly increased order efficiencies via stored payment information, and combined with the ability to capture customer information, order history, favorites and the convenience of having someone else physically manage the order proved critical for The Habit; otherwise these orders, especially the larger orders, might otherwise be lost were it not for the speed and convenience provided by the RRT solution. The Habit results also debunks common perception regarding the excitement surrounding new and prevalent technologies within the takeout industry – specifically online and mobile offerings – as a superior revenue generator to business generated via the phone.

With the Habit, 67% of their total off-premise takeout business originated over the phone which supports the proposition that the true marketplace potential is implementing a fully integrated, end-to-end solution which includes phone, online and mobile and not simply offerings that focus solely on online and mobile transactions.

The advantage is providing customers a live person via RRT’s call center to walk them through their order, answer questions, and politely suggesting additions, as well as the ability and support to efficiently handle more complicated orders which normally include orders for a larger number of people.

Operational ROI: Offloading 40,000 Monthly Calls and Rescuing Issue-Related Orders
During peak lunch and dinner dining hours, customers are often lined up out the door waiting to order their meals, making it very difficult for The Habit staff to answer the phones and handle a series of long calls. Once The Habit completed the full RRT installation, this pressure was eliminated within the restaurants during these peak periods.

RRT thus far is offloading over 40,000 calls per month (with this number increasing every month), each call roughly 3-4 minutes in duration, leading to 2,000-3,000 hours of staff time per month that can now remain focused on the dine-in customer instead of handling the phone. While most CFO’s will label this as a “soft cost”, it clearly is extraordinarily valuable and helpful to restaurants like The Habit in keeping operations succinct and streamlined.

Furthermore, because of RRT’s order management agility and integration, The Habit also operationally began to “rescue” orders ordinarily lost. RRT’s order management software owns and monitors the takeout order from inception to successful completion (customer arrives at The Habit to collect order), no matter if it comes in through the phone, online or mobile platforms, and includes a unique ability to capture or rescue orders with issues.
If an issue arises with an online or mobile order, RRT’s order management dashboard flags the issue, and a RRT call center agent proactively calls The Habit location and the customer to immediately resolve the problem before it is lost. Usually, online and mobile customer issues are elementary like the declining of a customer’s credit card, of which RRT (on behalf of The Habit location) contacts the customer to retrieve a new credit card number and help to complete the order successfully.  This service has consistently allowed the Habit to save and capture orders that typically may not have been successfully completed – salvaging business and retaining more satisfied customers of The Habit.

Qualitative ROI:  Functioning at a Higher Service Level
Beyond the leaps and bounds made quantitatively and operationally, The Habit also experienced qualitative enhancements in their overall customer service.  Following the full installation to all locations, feedback regarding their takeout service became more positive as reflected on various social media and customer review sites. In fact, the enhanced service level from the RRT order management solution, online and mobile technology, and call center order agents increased positive customer feedback for the organization amassing new loyal champions of The Habit chain. 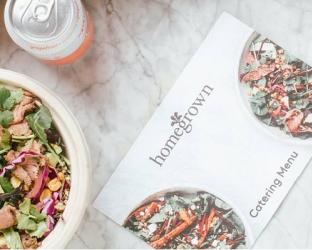