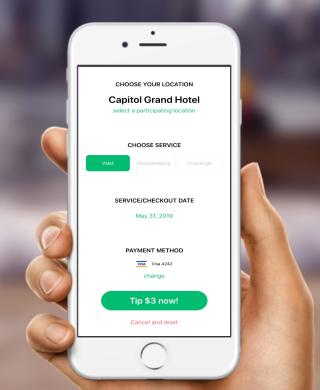 Meet Bill – a guest at your hotel, wrapping up a 2-night stay in room 419 for a business trip. It is 9:03 AM and Bill is ready to head to the airport. Gathering his bags, he checks his wallet for a $5 bill to leave a tip for housekeeping, but as usual, he is not carrying any cash.

Rushing out of the hotel’s elevator, Bill asks the front-desk clerk, “Where’s the closest ATM?”  “Two blocks south, on the right,” she answers. “It’s raining – you might need an umbrella.”

One block into his walk, rain seeps into Bill’s blazer and he regrets not listening to the umbrella warning. A cabbie nearly runs him over as he beelines to the ATM machine. As Bill inserts his card, the machine reminds him of the $3.50 service fee for a cash withdrawal. Bill begrudgingly agrees and stuffs a few dry twenties into his wet jacket pocket.

After a soggy walk back, Bill looks like he went for swim fully dressed in the hotel’s pool. He now needs change for the $20s the machine charged him $3.50 for, so he hops in line at the lobby coffee shop. After waiting several minutes, he purchases a small cup of Joe that he won’t drink for $2.99 with his crisp $20 bill. He hustles back to his room and leaves the $5 housekeeping tip.

Overall Bill spent an additional $6.49 (130% of what he planned to tip), and it took him an extra 20 minutes to make sure that he had properly acknowledged the hotel staff.

As he pulls out his phone to order his rideshare to the airport, Bill sighs and thinks to himself – “I wish there was an app for tipping…”

As society steadily progresses to becoming more and more cashless, mobile tipping is no longer a futuristic idea. It’s becoming a necessity. While Bill is a nice guy willing to walk in the rain to the ATM, how many others aren’t willing to get wet? How many other guests are running late to catch a flight and can’t spare the time to find the ATM?

Unfortunately, the actions of those guests who can’t or won’t go through the hassle to secure a tip end up hurting hotel staff. But for this type of technology to work, it must check off a few key boxes. Here are three questions to ask about potential mobile tipping platforms:

Mobile tipping is an opportunity for hotels to make life better for employees and meets guests’ expectations – just ask Bill. He’s back for another quick business trip, and this time he noticed in a pre-check-in email that the hotel now offers mobile tipping.

Bill downloaded the app on the ride in from the airport, and it’s coming in handy already – the hotel concierge helped secure hard-to-get dinner reservations for him and a potential client, and Bill showed his gratitude through a generous tip with just a few taps on his phone screen.

As he enters his room, he notices that it’s sparkling clean and well stocked with towels and extra pillows thanks to the hard-working housekeeping staff. This time, Bill remembers, leaving the tip they deserve will be much easier.

W. Brian Walsh has over 25 years of notable experience in fundraising, marketing and FinTech for many high-profile organizations. He founded TipYo in 2019 to revolutionize gratuities for the hospitality industry, allowing travelers (most of whom rarely carry cash) to tip hospitality workers via their mobile devices.

Brian is an Entrepreneur in Residence at the Catholic University Busch School of Business’ Ciocca Center for Entrepreneurship. He is a Board Member of global nonprofit Watts of Love, has been active in local youth sports programs, and volunteers weekly for Prison Ministry.